Digital art is immersing itself in 3-D motion, industrial-style glass walls and windows are bringing luxury homes closer to nature, and butler’s pantries are getting an upgrade. Below, the latest trends in art, architecture, and design.

Works in 3-D motion design are literally taking the art world in a new direction, capturing the attention of collectors around the world, and animating a whole new generation of techy artists.

The special-effects images, displayed in public spaces, on big-city advertising billboards, or on social-media platforms, are meant to engage viewers.

Paying homage to the “I Heart New York” motto, Shane Fu, a New York City artist who has been creating digital 3-D motion design work for almost three years, once filled the streets of Manhattan with 3-D floating hearts. In St. Petersburg, Russia, Vadim Solovyov sent a school of enormous stingrays flying through the city’s skies and depicted a giant raccoon washing its paws in the city’s main river.

“My work often features abstract movements in a confined space,” says Fu, whose works have reached cities such as Shanghai and Sao Paulo, Brazil.

His Back Alley Recycling and Limerence, for instance, are digital creations superimposed on top of video footage that is disguised as public exhibits.

“A big trend in 3-D motion graphics is to create moody, photoreal, and atmospheric environments, while my art goes against the grain in that it’s incredibly stylized and fun and takes a lot from pop culture,” she says. “My primary influence is all the movies and TV shows that I watch, but I’m also inspired by everyday life; a lot of the characters I create are based on real people I’ve met.”

Artists are embracing 3-D motion design in large part because it is so accessible. “You no longer need a high-end computer to do 3-D,” Porat says. 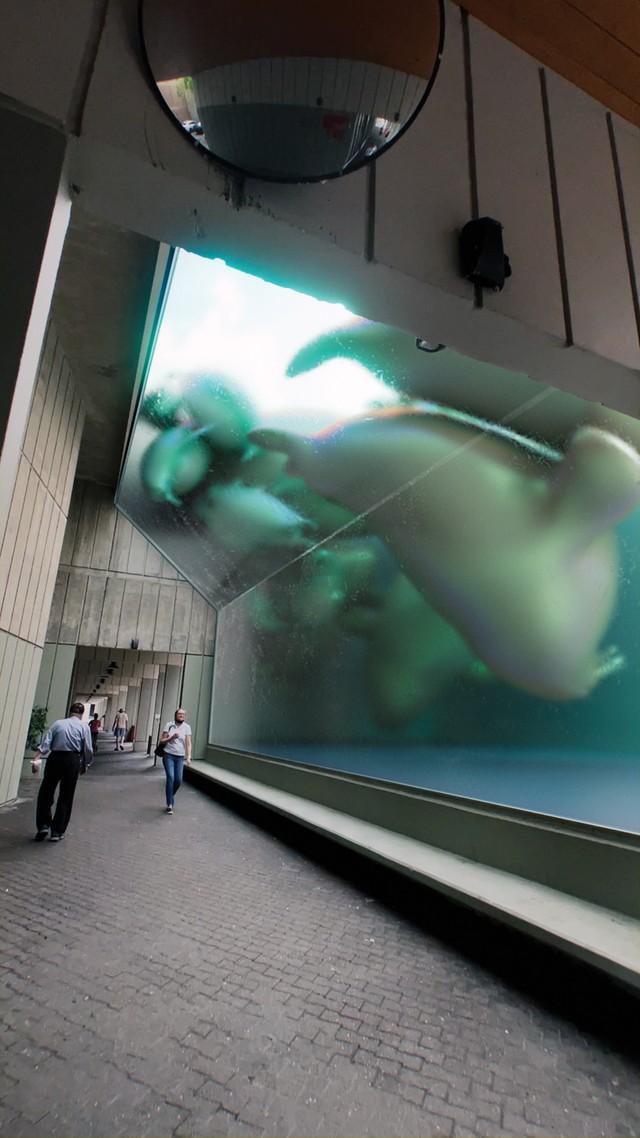 A still frame from his Competitions piece. 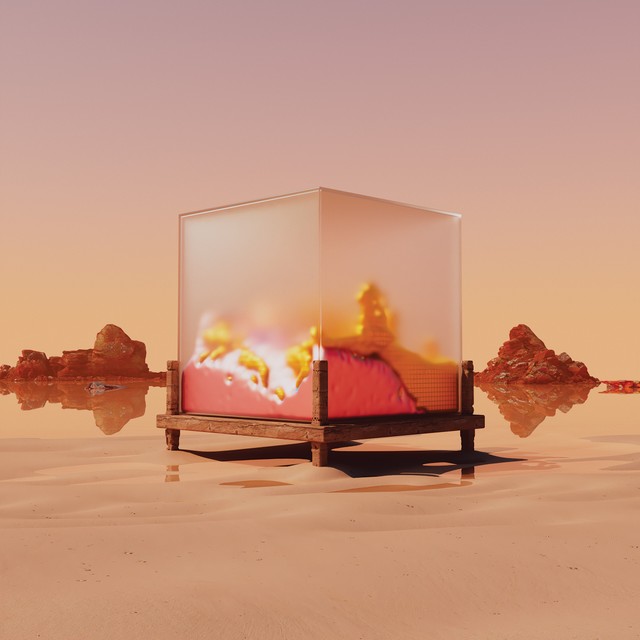 For a 10,000-square-foot modern colonial in Los Angeles’ Brentwood Park, architect Bobby McAlpine encased the back and sides of the ground floor of the home in the factory-style glass.

“In the great room, the floor-to-ceiling glass doors that run the room’s length make the wall disappear so the outdoors pours in for entertaining,” says Meg Joannides, principal of Los Angeles-based MLK Studio, the interior design firm for the project. “They seem timeless and beautiful, and this house is not super modern so they are appropriate for the style of the architecture.”

Plus, the window muntins (the vertical dividers that separate glass panes) are elegantly tapered and extremely thin to “give the distinct look of a modern detail” that retains a historic feel, she says.

In another new-construction home in Los Angeles that Joannides is working on, steel windows are being used as transparent room dividers to close the family room from the kitchen and the main hallway. “They disappear into pockets in the walls so you don’t feel boxed in,” she says.

She adds that the steel windows and doors “are a great look that never goes out of style–100 years later, we’re still using them.” 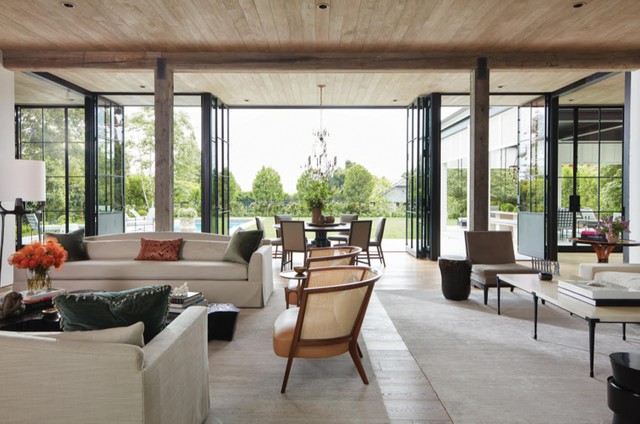 Walls of glass define the great room in a house designed by Bobby McAlpine and decorated by MLK Studio.

The butler’s pantry has been elevated to an elegant entertaining essential in luxury residences. “It is a buffer between the dining room and kitchen,” says Jennifer Gerakaris, a partner at Peter Pennoyer Architects. “They can be dressy or utilitarian but always reinforce the style of the house.”

Architect Tim Barber, whose eponymous firm is based in Los Angeles, says they are indispensable for large-scale living. “We use them as bars, dessert staging areas, for espresso and tea prep, even flower-arranging zones,” he says.

During the renovation of an early 20th-century stone and brick French Renaissance mansion, Peter Pennoyer Architects designed a butler’s pantry equipped with a German-silver sink, traditional cabinetry, storage spaces, and direct entry to an elevator. A custom service trolley, complete with its own compartment that serves as a docking station, facilitates serving.

For a new Southern Colonial Revival house he designed in Atherton, Calif., Barber wrapped the butler’s pantry in lacquered cabinetry that has old-glass doors, a mahogany countertop and lacquered brass hardware. It features a second dishwasher, an ice maker, beverage fridge drawers, a warming drawer, a liquor lockup, storage for serving pieces and table linens, and displays for stemware. The new pantries, he says, “salute the legacy of fictional butlers past.”

An elegant and functional butler’s pantry by Tim Barber Architects. 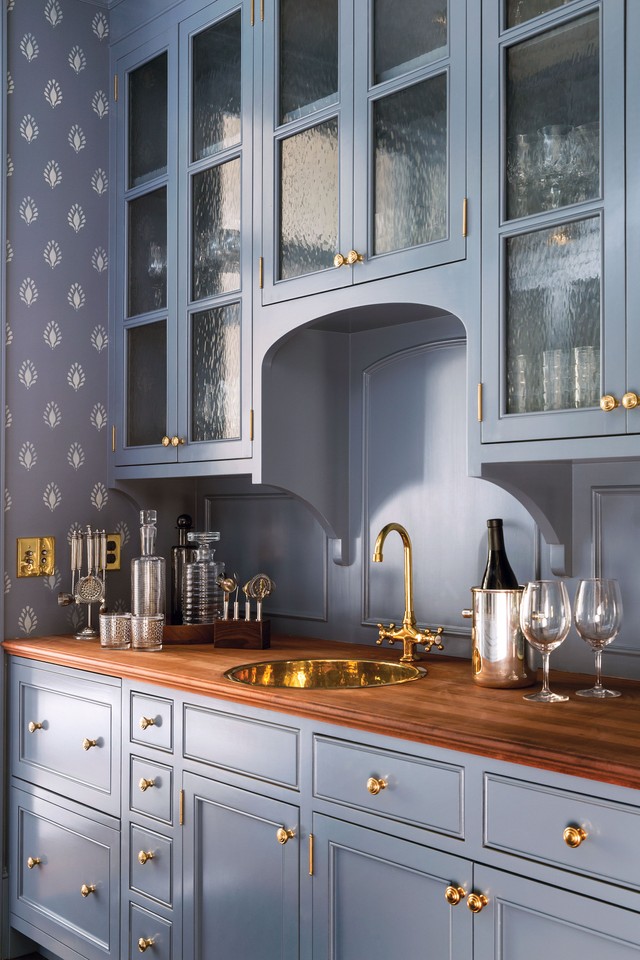