Encircled by the grand Ringstrasse (The Ring) boulevard, Innere Stadt, Vienna’s old town, is the historic and emotional heart of the Austrian capital.

“It’s the best address you can have in Vienna,” says Martina Abiodun, a sales associate with Austria Sotheby’s International Realty, who adds that Vienna has been awarded the title of “most livable city in the world” for several years in a row by various organizations. “Some parts are elegant and fancy, but other parts are young and stylish enough to attract a very hip crowd.”

Innere Stadt, whose name means “Inner City,” is defined by old-world apartments and condos, most of which are early 20th-century houses and palaces in the Wilhelminian and Art Nouveau architectural styles.

“Some of them are more than 300 years old,” Abiodun says. “There are hardly any new buildings because they are protected historically. Within the last decades, they have been carefully restored and modernized to match today’s standards of living on a high level.” Prices, she adds, are €10,000 to €30,000 per square meter of living area (US$12,027.60 to US$36,082.80), depending on location and amenities.

“In the last several years, many luxury penthouses with big rooftop terraces, some of them with private pools, have been built on top of historic houses,” Abiodun says. “Usually, they offer a stunning view all over Vienna and all the luxury amenities a buyer at that price level desires.” 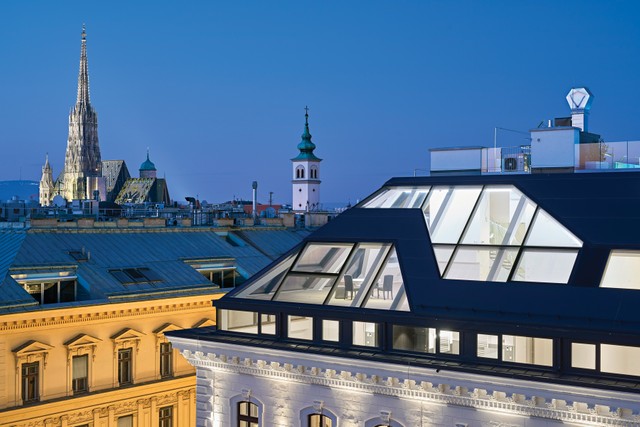 What Makes It Unique

Innere Stadt is a cultural and commercial mecca.

Some of the city’s most significant historical and most stunning architectural treasures are within its boundaries.

St. Stephen’s Cathedral, the mother church of the Roman Catholic Archdiocese of Vienna, is considered the most important religious building in the city. Its multicolored tiled roof defines Vienna’s skyline.

Karlskirche, or St. Charles’ Church, is another of Innere Stadt’s iconic religious monuments. The Baroque church, which dates to 1716, is dedicated to the 16th-century saint Charles Borromeo. The 13th-century Hofburg, or “Castle of the Court,” was once the principal palace of the Habsburg dynasty; today, it is the official residence and office of the president of Austria.

Constructed from 1872 to 1883, the Neo-Gothic Wiener Rathaus or Vienna City Hall, which is renowned for its soaring central tower, is another architectural attraction. The neighborhood also houses the Austrian Parliament Building, a Greek Revival-style structure completed in 1883.

For those more interested in present-day pursuits, Innere Stadt offers a variety of cultural institutions, theaters, designer shops, restaurants, bars, and nightclubs. The department store Steffl sells a variety of luxury fashion brands such as Helmut Lang, Max Mara, Moschino, and Pucci. Brand boutiques, including Chanel, Dior, and Tiffany, are located in the prime shopping streets of Kohlmarkt, Tuchlauben, and Kärntner Strasse.

There are many fine-dining options. Figlmüller, a family-owned restaurant that was established in 1905 and has three locations in the neighborhood, is legendary for its wiener schnitzel, and Plachutta, which is famous for its beef dishes—notably Tafelspitz (boiled beef)—has two locations in Innere Stadt that offer outdoor cafe-style seating.

Popular night spots include Sky Bar, a terraced rooftop venue close to St. Stephen’s Cathedral, and Eden Bar, which according to its website, has played host to the rich and the famous, including Joan Collins, Orson Welles, Ella Fitzgerald, and Liz Taylor, since its establishment in 1911. “There are always all kinds of cultural and musical events all year around that are free,” Abiodun says, adding that the Christmas markets and the film festival, in the Rathausplatz, the plaza in front of the city hall, attract thousands of people every season.

Locals and visitors alike enjoy frequenting Innere Stadt’s Austrian coffee houses, which, Abiodun says, “have this unique and inviting atmosphere of past times and offer many sweet temptations, including strudels and cakes.”

She adds that Café Central, which has been a meeting place of the city’s glitterati since 1876, “probably has the most beautiful architecture of all coffee shops in Vienna,” and the Café Sacher Wien, which is next to the hotel of the same name, “is well known for the famous and most original Sacher torte—a rich and delicious chocolate cake.”

For relaxation, residents often head to Stadtpark, a 16-acre green spot where, Abiodun says, “you can stroll around or sit and watch the ducks in the pond.” There is so much to do and see in Innere Stadt, she says, that some families have been residents for generations.

“It also is, of course, the No. 1 sought-after area for buyers from all over the world who want to have a second or third home in Vienna,” she adds. 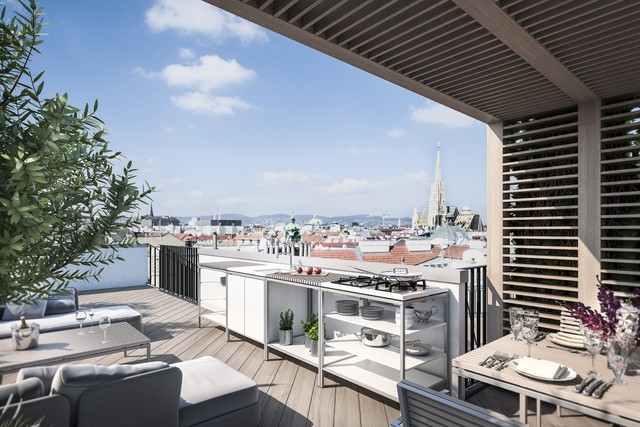