As relaxed as it is regal and as approachable as it is precious, there’s a duality about linen fabric that makes it work for both a casual space by the sea or a chic loft in the city. “Linen is at once both elegant and organic. It truly lends itself to any style of space from the most minimal to truly traditional,” says Grant Trick, of Grant Trick Furnishings in Irondale, Ala.

Made from the fibers of the flax plant, linen has an earthy touch that renders it versatile for drapery, upholstery, bedding, and wallpaper. “It feels simultaneously modern and earthy,” says Marea Clark of Marea Clark Interiors in San Francisco. “Inherent textural qualities make it interesting.” It’s that same versatility that enables it to be iterated in many different weaves and finishes, from the lightest translucent to the heaviest weave, says Susie McLaren, creative head of residential interiors at SHH, an architecture and interior design practice in London. It can be woven into jacquard patterns and multicolored herringbones, and can be hand, screen, or digitally printed. “Either natural, bleached, or dyed, its character always comes through,” McLaren says.

Linen is generally strong and hard-wearing, and its character improves with washing and age. Light and midweights are perfect for formal pleating and embroidery, while washed and stonewashed varieties are ideal for a more relaxed look, McLaren says.

The material is also naturally anti-microbial and resistant to mildew, “which is especially good for humid climates,” says Kristin Hildebrand, lead designer and CEO of KH Interiors based in Southern California. “Its fibers are so tightly woven, they won’t loosen over time, making whatever linen you have in your home last longer,” she says.

How and where to render this fabric within your walls is only a matter of the style you seek for your home. 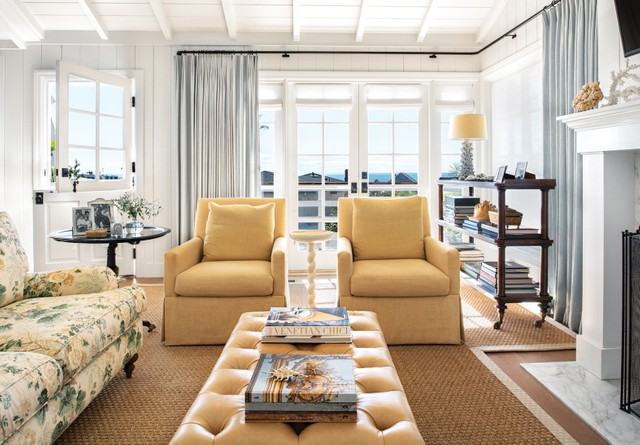 San Francisco-based interior designer Marea Clark uses linen for upholstery and drapery, since she sees it as both modern and earthy.

Let It Come to Life

Linen can be used in just about every room in your home—as furniture fabric, upholstery, or as “linens” for the bedroom or dining room. For a beach bungalow, lightweight linen curtains look breezier when unlined. Heavier weight-lined and underlined linen drapery befit a more formal living space. Phillip Thomas, founder and principal of Phillip Thomas Inc. in New York City, often uses a heavy flannel as lining when he wants to give panels more structure.

Hildebrand loves to use linen for roman shades in window treatments. “Sometimes we select solid neutrals for a shade, and other times we mix it up with a patterned linen. In both scenarios, the soft organic feel of the fabric has a beautiful effect,” she says.

As upholstery for furniture, linen can be rendered in myriad ways. Sofas can be tightly upholstered or swathed in loose covers for a more casual and versatile look, McLaren says. Slipcovers are a smart choice for high traffic seating because they can be easily switched out and laundered. Linen also partners well with other fabrics. “Linen upholstery with leather piping is always a smart combination,” McLaren says.

In the bedroom, linen is perfect for headboards and bed bases. “It’s absorbent and breathable, which makes it naturally hypoallergenic, so it’s ideal to use in bedrooms and particularly for bedding,” McLaren says. She also uses embroidered antique linen sheets as throws for sofas and embroidered linen for window blinds. “Vintage linen sacks can be reused for upholstery and cushions and mixed with other fabrics for a totally unique look,” McLaren adds.

And instead of the often-used grasscloth wallpaper, try a linen option. “It really warms up spaces by softening walls that might otherwise feel stark with paint,” Clark says.

“Linen is available in a wide variety of textures and patterns that open up the opportunity for dynamic and creative interiors,” Thomas says. The beauty of it is it can be integrated into both formal structured furnishings as well as more relaxed, informal furnishings, he says.

Trick suggests using washed linens for slipcovered pieces wanting soft and imperfect textures. “Expect cushion covers to grow a bit over time; flip often and fluff feather inserts,” he says. He also loves linen velvets for upholstery, which he says can be formal or relaxed. “I love that they come from the mill already having a gorgeous patina that just gets better with age. Linen velvet ‘wears in’ and doesn’t wear out like cottons and synthetics. The more you live on it, the signs of use just add a layer of authenticity that you don’t get with some other velvets,” Trick says.

As a breathable fiber, it’s cool in the summer and warm in winter, McLaren says. For cooler months she suggests layering it with other materials such as wools, cashmeres, and faux fur for a cozier vibe. “In summer, floaty unlined white linen at open windows and loose linen couch covers in paler, more summery colors” are ideal, she says.

Miami-based designer Constanza Collarte of Collarte Interiors considers linen a go-to fabric because she’s able to use it year-round. “I tend to favor laundered or washed versions—in fact, the more wrinkled and casual looking, the better for that lived-in look,” she says. “It’s organic and adds a ton of texture to any room and it takes on color beautifully in more muted tones.”

A bedroom designed by Miami-based Constanza Collarte uses linen to pull off a chic lived-in look. 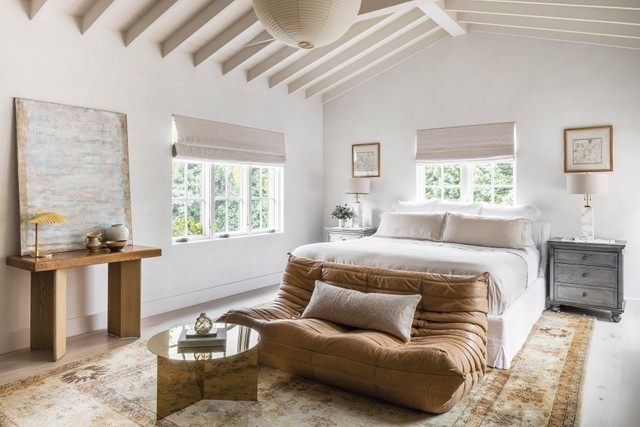 It is important to understand (and embrace) the potential for wrinkling with linen, Thomas says. “If that’s not something you can stomach, then I recommend staying away from the fabric or using a blend, such as linen cotton, which is called union cloth.”

Although linen is strong, the lighter weights can eventually deteriorate in time with excessive washing, McLaren says. “Open weaves on upholstered furniture can be vulnerable to catching and tearing, but this would be similar to any open weave fabric.”

And, like every upholstery fabric, linen benefits from regular maintenance. “Vacuuming at least once a month to remove surface dirt will extend your linen life a lot. And if you have an accident, probably best to call a professional upholstery cleaner,” Hildebrand says.

Because linen is hydrophilic, meaning it absorbs moisture from its environment, don’t expect perfection, Trick says. “Drapery, in particular, will almost always stretch and shrink. When it’s installed and steamed, it will grow; when heat is running in cold months, it loses moisture and shrinks,” he says. “This is what makes it special and what makes it more fabulous than synthetics—like a living, breathing thing.”

For upholstery, Trick recommends having the fabric knit-backed to improve the tailoring and help prevent some of the natural stretching that occurs on cushions, pillows, and bedding. Just ensure you use the correct weight and finish for its function, McLaren says. She suggests using a robust heavyweight linen for fixed upholstery and a soft fluid finish for drapery. “Embrace its character and tendency to crease; it’s all part of its relaxed charm. Washing it will soften the structure and may lighten the color, but that’s part of its appeal and character to be celebrated.”