Multi-hyphenate Terry Crews has spent the whole last year in Los Angeles, enjoying the “family compound”—a combination of his home and studio, the latter of which he recently designed from a former stable in Pasadena.

Crews, who hosts America’s Got Talent on NBC and will return in his role as Lieutenant Terry Jeffords on the next season of Brooklyn Nine-Nine this fall, recently put out an audio memoir with his wife, Rebecca King-Crews, called Stronger Together, discussing their 32-year marriage. The famously fit star, 52, began his career as a defensive end and linebacker in the National Football League, before turning to show business, where he’s also starred in Everybody Hates Chris and hosted Who Wants to Be a Millionaire?

Crews has appreciated spending more time close to home since the quarantine began. “Thank God for these Zooms. I’m never driving to Santa Monica again,” he says with a laugh. His new studio, located about 10 minutes from his house, is about 3,000 square feet and has rapid scanning, UV lighting, and high-pressure steamers to make sure everything is Covid-safe. It’s done so well, he says, that “it’s hard to leave.”

His new production studio offers him a one-stop shop for working on his projects, and his wife uses it for her home office, as well (she’s an actress, producer, singer, and designer). “It’s an extension of our home,” he says. While the family currently lives in a “classic Spanish-style home,” they’ve had plans drawn up to create a more modern house. For now, they’re in the market for the land.

We caught up with Crews to discuss his six favorite things in the family’s two-structure compound.

“At the studio, we created a 20-foot-by-15-foot wall where you can create any environment. We teamed up with Logitech and I can even have live events streamed here.” 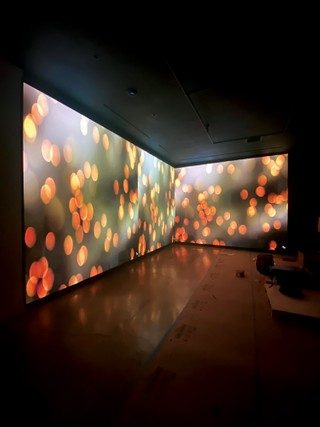 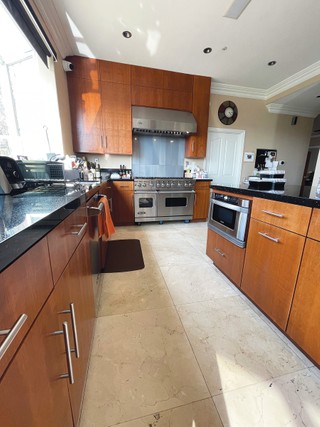 “This is the most modern part of the house, with all the Viking stuff you could imagine. It’s our favorite place to hang out—by the large island.”

“This is kind of the statement piece. It even has a rolling ladder. The most valuable thing I own is my book collection. We probably have eight to nine bookcases and they’re filled with books on design, art, fashion, and cooking. My books are in all my Zooms…you can always see bookshelves in the background.” 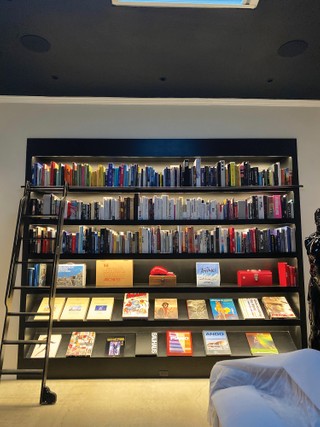 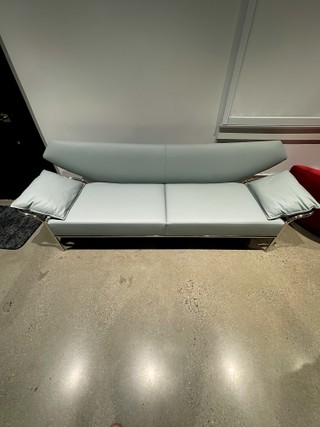 “All the furniture that’s in my studio, I designed with Bernhardt Design. We’ve got couches and benches and settees. Before the pandemic we were headed to the International Contemporary Furniture Fair with my new armchair and credenza, and we’re building out my collection.”

“We have a giant table that seats about 15 people. Then there’s this big couch area with a fire pit, and the movie screen comes down from the pergola and the background is the mountains, the Eaton Canyon foothills. I love to spend time there. During the whole pandemic, I’ve used it like my living room. It’s a showstopper…I spend as much time outside as I can.” 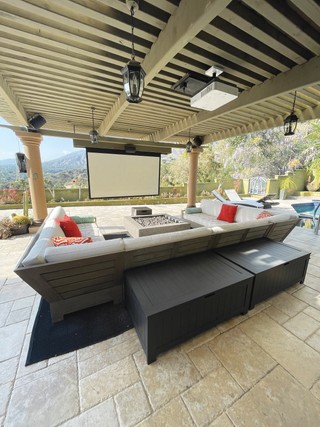 “Another thing that I’m super proud of is that I essentially built an Equinox on my tennis court. My wife was telling me for years to build a gym, but I always liked hanging out with people at the gym and didn’t want to do it at home. With the quarantine, we put a professional tent up, we have professional lighting, we redid the floor. It feels like a real, giant gym…my mobile Equinox. When the pandemic hit, we had to create a compound. We had to create these areas where we create a semblance of normalcy.”