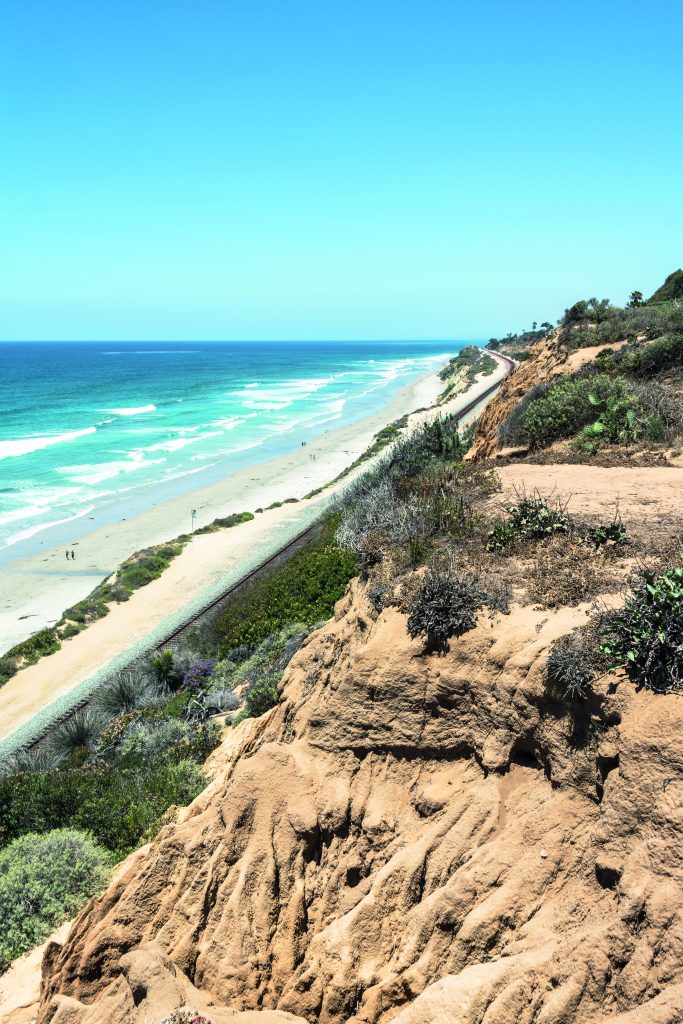 In 1885, Colonel Jacob Tayler purchased 338 acres of land on the California coast with the notion that he’d develop it into a seaside resort for the rich and famous.

He gave it the lyrical name “Del Mar,” which is Spanish for “of the sea.” By the early twentieth century, the town was indeed attracting movie stars from Hollywood’s silent era. A racetrack built in the 1930s kept the celebrities coming, and racing season each year saw many of Hollywood’s elite in town. After more than 80 years, the racetrack is still operating.

Today, Del Mar is known as a laid-back coastal town with upscale living and near-perfect weather. And one of the town’s best assets is still what Colonel Taylor saw over 130 years ago – a fabulous coastline with spectacular beaches. 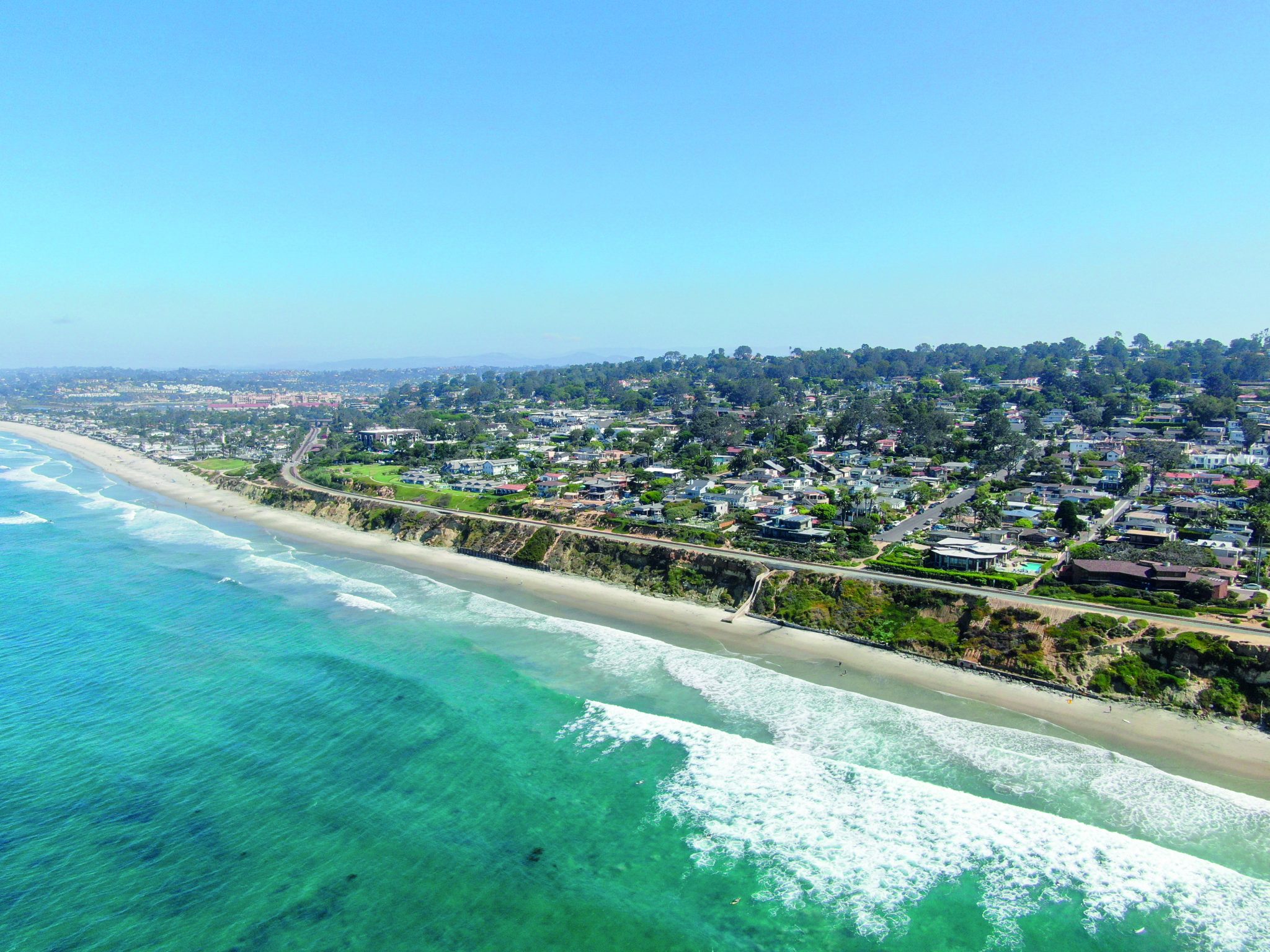 Del Mar’s main beach starts at Powerhouse Park and runs north for about 11 blocks to the lagoon entrance at the San Dieguito River. It’s a great family-friendly beach with lifeguards, good swimming conditions, moderate surf and easy access along its entire length. Parking can be hard to find on sunny days, so your best bet is to head to the residential streets just south of the beach. That means you’ll enter the beach from the Seagrove Park/Powerhouse Park end, which are pleasant grassy areas with a playground, picnic tables and benches that overlook the beach. Powerhouse Park has walking paths as well as restrooms and showers, and during the summer you can rent surfboards, bodyboards, paddleboards and even wetsuits. The beach is a bit more rustic at its southern end, and it can get a little narrow at high tide. Restaurants, a snack bar and shops are nearby. Bring a picnic lunch during the day, or come in the evening with a bottle of wine and watch the spectacular Pacific sunset. 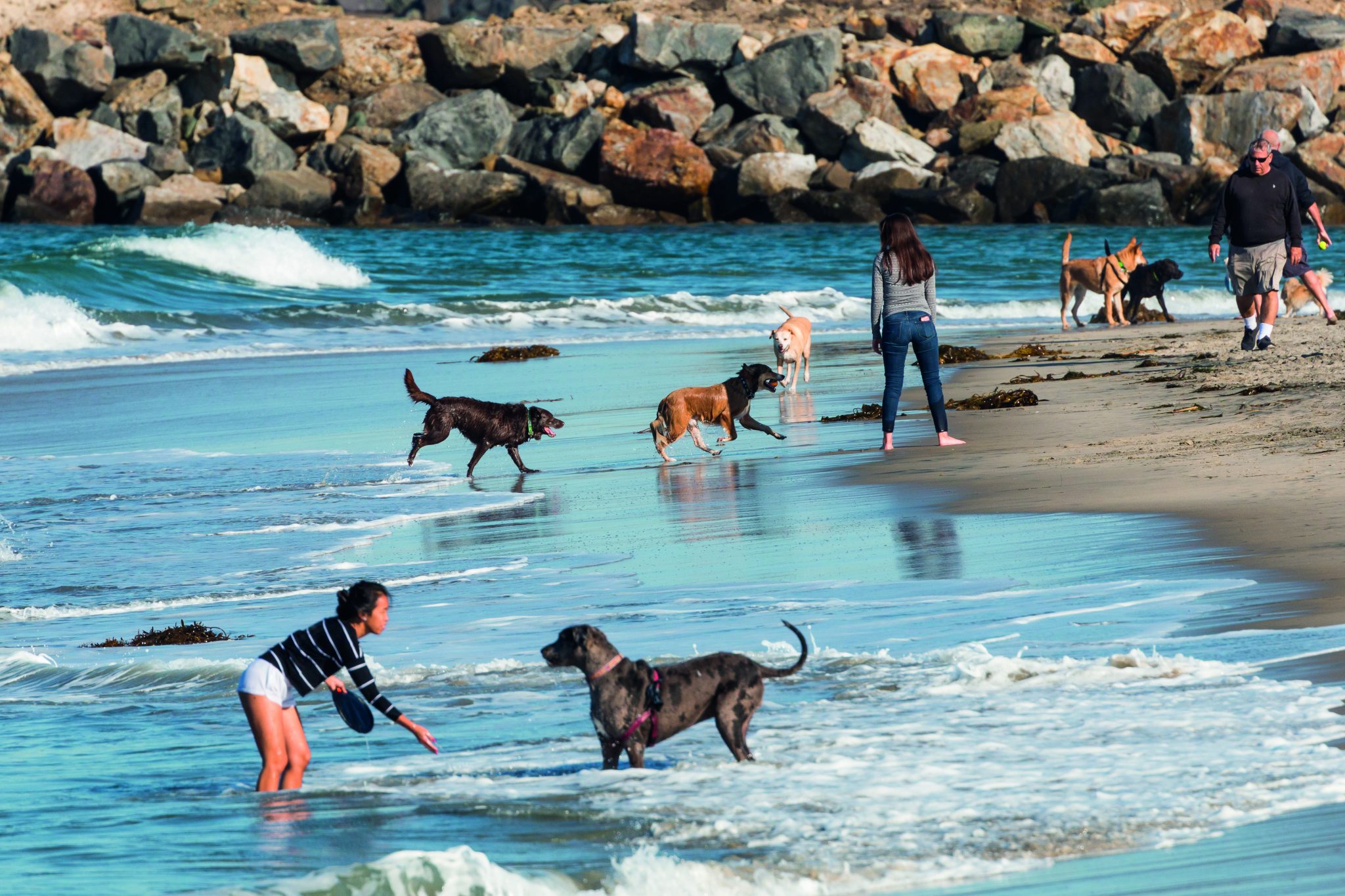 Known by the locals as Dog Beach, Del Mar North Beach runs north for a half a mile, from 29th Street all the way to Solana Beach. As its unofficial name implies, you can bring your four-footed friend to frolic in the waves; dogs can run without a leash almost year-round (except from June 16th through Labor Day when there is a leash requirement). The main part of this beach is on the north side of the San Dieguito River Lagoon entrance next to Camino del Mar. Popular activities include volleyball, surfing, swimming, dog walking and fishing. From North Beach, you can take the short hiking trail up to an overlook at James Scripps North Bluff Preserve for a panoramic 360-view of the coast, lagoons and sea. Look for a wooden staircase that leads up to the trail. Street parking is free along Camino Del Mar and at 29th Street.

Picking up at Powerhouse Park and running south, this beach stretches all the way to 6th Street at the north end of Torrey Pines State Beach. It’s less peopled than Del Mar City Beach and with fewer amenities, but it’s a place where locals like to go to walk at low tide. It can get very narrow at high tide, which limits sunbathing and other activities. You can park near Powerhouse Park or Seagrove Park, and there is also free parking on the street near the west end of 13th through 6th Streets; you’ll have to cross the railroad tracks and then find a route down the steep cliffs to the beach. The safest and easiest path down the bluff to the beach is at 11th Street, but you can park at any of the numbered streets and walk along a dirt path next to the railroad tracks to get there. 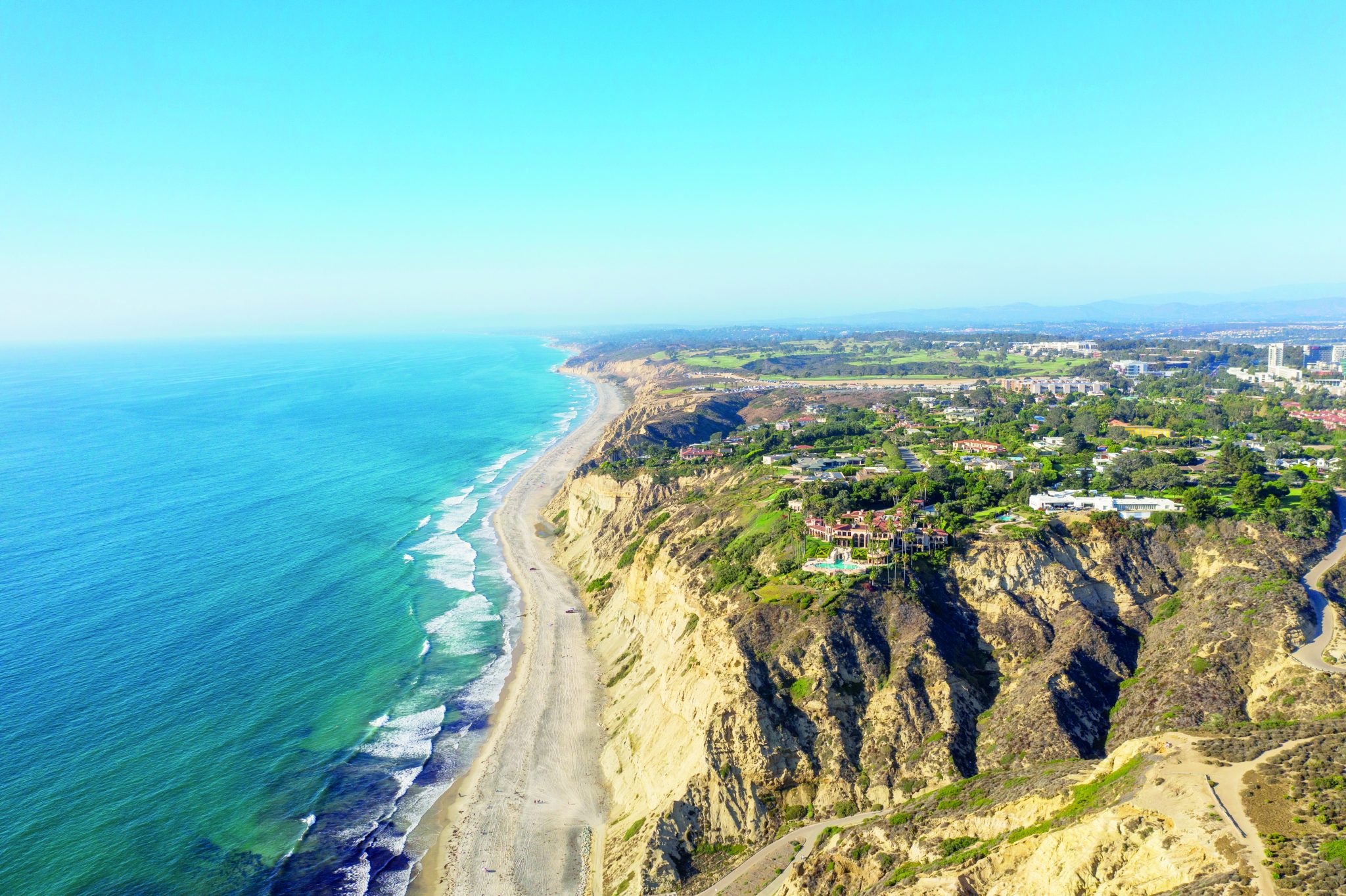 North Located on the north side of the lagoon entrance at Los Peñasquitos Marsh Natural Preserve, Torrey Pines North Beach has a large parking lot with easy access and well-maintained facilities. The surf here can be moderate and safe for swimming, but when the waves are up, it’s better suited for surfing. Lifeguards are on duty during the summer months. Just above the beach is Torrey Pines State Reserve, which – despite being in one of the most heavily populated counties in the country – remains one of the wildest stretches of land on the Southern California coast. Two thousand acres of rugged, dramatic landscape includes plateaus and cliffs that overlook the beach, and the views are absolutely spectacular. Eight miles of hiking trails meander throughout the reserve, and native wildlife includes bobcats, foxes, skunks, raccoons, coyotes and rabbits. If you venture off the beach into the reserve, remember that no food or drink (except water) is allowed, smoking is prohibited and dogs aren’t allowed in.