While modern motorsport has achieved a level of efficiency and safety that would stun any racer from the previous century, at least in terms of visceral driving experiences, nothing beats a drive in a mid-century race car. The golden era of petrol-powered motorsport, at least for some still-devoted enthusiasts, encompassed the decades immediately after World War II, when regular road cars were elevated to competition-grade, with performance-oriented upgrades that, in turn, helped the advancement of every roadgoing automobile.

During this glorious period, the starting grid of your local sports car race division resembled the showrooms at your local dealerships, at least, from a distance. Upon closer inspection, one could witness automobiles that had been completely transformed underneath (and sometimes including) their body shells, with higher-capacity engines, up-rated suspensions, and added safety systems, all in the aims of outlasting their opponents in all-out challenges of endurance. Today, the best of these historic racers have earned a place of honor at RM Sotheby’s most prestigious auction, Monterey, running this year for three days from 12-14 August. 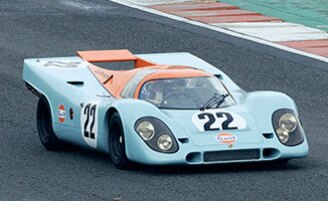 Perhaps no automaker has been as successful as Porsche in terms of offering roadgoing models with motorsport-spec bona fides. Famous for being the favored brand of both James Dean and Steve McQueen, the Type 550 in particular became forever associated with racing in Southern California. This example, imported by New York City’s Hoffman Motors, was distributed to its first dealer, John von Neumann’s Competition Motors in North Hollywood. The pedigree continued, with first owner, privateer Robert “Bob” Donner Jr., immediately taking this Type 550 racing at Sports Car Club of America events throughout Southern California and across the country from 1956-1959. This Type 550 even raced in-period against the real-life lead character of Ford vs. Ferrari, Ken Miles, at both Bakersfield and Pomona in 1956. At that point, before his collaboration with Shelby, Miles also preferred Porsche.

Sometimes, the elevation of one road car to motorsport level can change the course of the entire model line. This example was specified by Jacques Peron, ordered from the Ferrari factory in a shade of blue to match his beloved Alfa Romeo Giulietta, and with several accessories and features made to compete in the automobile class of the Tour de France in 1958. While the Ferrari factory delivered the finished ‘Tour de France’ 250 GT LWB without sufficient time for Peron to properly test the car, he and his co-driver Harry Schell still managed an exceptionally impressive 4th place overall. Having recently completed a recent nut-and-bolt restoration to achieve as close as possible to the elevated racer originally received by Peron in-period, and still retaining its numbers-matching engine and gearbox, this striking Ferrari set the tone for many future touring racers released by the prancing horse brand.

Italy was not the only country where one could procure an elevated road car, though it must be said, the Italian influence spread further than most expect. Having learned (and licensed) the patented superleggera methods of chassis construction popularized by Carrozzeria Touring of Milan, Aston Martin decided to produce the finished DB4 models at their then-newly completed Newport Pagnell workshop; the first of the British brand’s models to be built in that now-storied facility. The DB4GT Lightweight variant denoted the next level of performance, with alloy body shells made to be even more thin than their already-superleggera DB4 siblings, and a significant upgrade in terms of powerplant, with the upgraded engine sporting a 9:1 compression ratio and twin spark plugs per cylinder. The engine upgrades were good for 302 brake horsepower, a significant jump from the 240 horsepower of the standard DB4. This example is part of the recently announced Andrews Collection, expanding RM Sotheby’s Monterey auction to a full three-day event. We will cover this collection in more detail in the approach to the auction on 12 August, but suffice to say, for fans of Aston Martin, these examples are the genuine article.

Earlier, we covered a Porsche Type 550 that was fortunate enough to compete in-period against Ken Miles in the mid-1950s. Less than one year later, Miles switched his Porsche for a new sports car brand that he would have a hand in shaping: Shelby American. Carroll Shelby’s eponymous Southern California sports car firm was as much a motorsport outfit as they were an upstart automaker, and in that spirit, prepared this 289-cubic-inch V-8-powered example, CSX 2129, as one of two Works-prepped Cobras in “Sebring”-specification. The upgrade package started with rack-and-pinion steering, and moved on to encompass additional auxiliary instrumentation, a black roll bar, hood scoop, flared fenders, Halibrand magnesium wheels, Raydot mirrors, side-exit exhaust, competition brakes, improved suspension components, quick-jack pads, a riveted hood, and auxiliary oil coolers. These oil coolers proved to be a contentious addition during the 1963 USSRC season, when during a race at the Lake Garnett Raceway in Kansas, SCCA officials deemed the oil coolers an unlawful addition for the A-Production class. Miles complied, removing the oil coolers, and placed third overall. In an extraordinary stroke of bravery, Miles then requested to be re-entered in the C-Modified class, where in full form with oil coolers re-attached, CSX 2129 took first place overall, and set a new course record with Miles at the wheel. A significant Shelby, indeed.

Our cover car is a true icon of elevated performance. Having accomplished a lightening program under the supervision of legendary German engineer and future director of Group VW, Ferdinand Piëch, this achingly rare example is one of a mere twenty 911 R models made in so-called “serial production.” As these examples were all finished by coachbuilder Karl Baur, their handbuilt construction was a far cry from the typical assembly line production Porsche typically employed. Bestowed with lightweight plastic side and rear glass, with many of the panels on its iconic body shape re-fashioned out of fiberglass, the final article of transformation was a magnesium-cased Type 901/22 flat-six racing motor. The view from the cockpit, as well inside the engine compartment, is a complete transformation even from the alternative sports-oriented option offered by Porsche in-period, the 911 S. This fully documented example comes with perhaps the ultimate evidence of elevation: An extensive race record including accomplishing a series of hillclimbs in its native France. A road car icon, elevated to competition-grade.