When visionary architect Ma Yansong’s “Train Station in the Forest” opens this summer in China’s Jiaxing, it will transform the site from a mere pedestrian departure point to a mega destination for travelers and tourists alike.

Derived from “shan” (mountain in Chinese) and “shui” (water), the Shanshui City concept, which was proposed by noted Chinese scientist Qian Xuesen in the 1980s, aims to bring humans and nature closer in urban contexts.

The term, which also references a traditional type of Chinese landscape painting, is rooted in the ancient practice of siting cities based on observations of earth and water and on Chinese emperors’ strategies of choosing locations surrounded by natural environments to protect properties from enemy assaults.

From the beginning of his career, Ma, who founded his architectural firm in 2004 and has a master’s degree in architecture from Yale University, has made significant contributions to urban architecture.

A world judge at the 2018 Prix Versailles, Ma, 45, has received a number of accolades, including Good Design’s 2013 Designer of the Year Award and the 2013 Young Architect Award of China Architecture Design in the 21st Century. 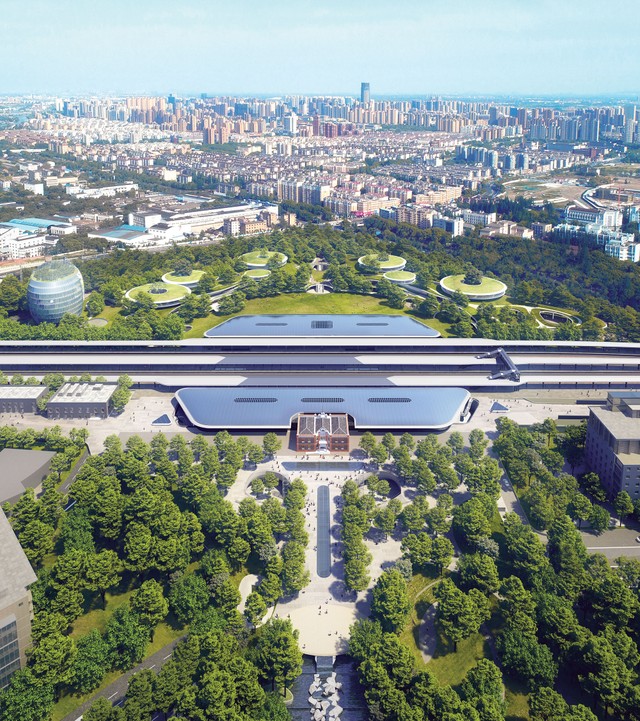 The latest project from MAD Architects in Jiaxing, China, feels like a futuristic space station. It’s also surrounded by greenery.

Jiaxing, which is close to Shanghai, Hangzhou, and Suzhou, is a key city for several major industries, and its train station, which dates to 1907, moves more than five million people per year. “China’s train stations are competing to be bigger than one another,” Ma said in a statement. “Standing tall in the city like grand palaces, they are surrounded by large main roads, imposing viaducts, and often empty plazas. Rather than this pursuit of grand, monumental architecture, is it possible for urban train stations to create their own beautiful environment, with comfortable scales and a blend of transport and urban functions that are both efficient and humane? Is it possible for train stations to be more than a stopover for travelers but an urban public space that people can enjoy?”

The Train Station in the Forest, which forms a borderless park with the surrounding area, is the sublime answer to his queries.

Under Ma’s plan, the 87-acre site, which encompasses the train station and the plazas to the north and south of the adjacent People’s Park, becomes a cohesive whole. The historic train station, which was destroyed in 1937 at the start of the Second Sino-Japanese War, has been replicated and rebuilt and will serve as a railway museum.

The “floating” roof of the new station, which looks like a futuristic space station and features solar photovoltaic panels, rises only a single story above ground to sync with the scale of the replica of the old station building.

Ma’s “forest,” which includes a newly planted collection of canopy trees in front of the entrance terminal, grows over the station’s concourse, platforms, and waiting room, which are hidden underground.

The underground waiting hall, which is illuminated with the natural light of skylights and a glass curtain wall on its ground floor, connects to the platforms via a futuristic tunnel. As riders walk through, they see the rebuilt old station overhead, a nod to the confluence of old and new that showcases the connection between past and future. 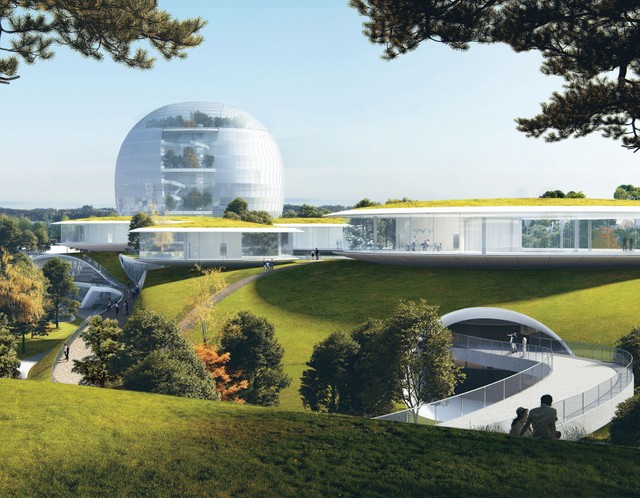 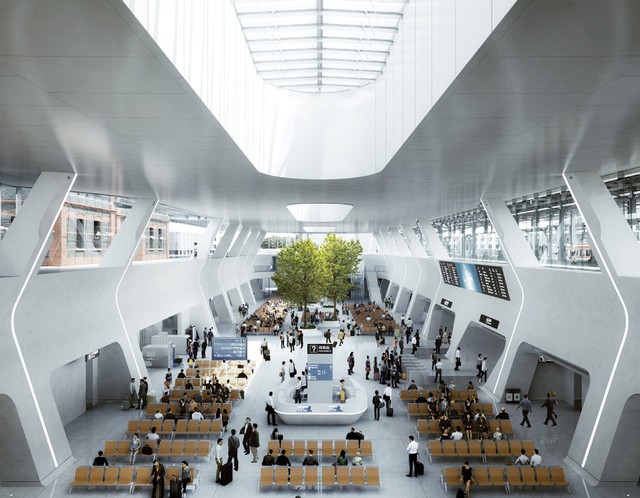 Sunken courtyards connect the underground commercial space with the parkland above, which includes an area enclosed by landscaped public lawns suited for a variety of events ranging from festivals and concerts to open-air, farmers’ markets.

The project, which adds a sixth track to the station when it opens in July, also provides connective links to the city’s bus terminals, a tramway, the subway, parking garages, and taxi stands. At peak time, the Train Station in the Forest, Ma’s new green urban center, will transport 2,300 people per hour to their destinations from the middle of an urban oasis.