With their terra-cotta-tiled roofs, stucco or stone facades, columns, ironwork, and arched doorways, these residences are designed to let the sea breezes in and bring the Mediterranean to mind.

Extensive gardens, landscaped with native flora and fauna; pools and water features; vaulted ceilings for air circulation; and plenty of terraces, loggias, and balconies are also hallmarks of these houses. Many have the feel and amenities of resorts, but their natural materials and muted colors blend into the surroundings.

“For years architects have been respecting the environment and they build and design their properties by integrating them into the landscape,” says agent Alejandra Vanoli of Mallorca Sotheby’s International Realty. “The design of these houses helps control the temperature inside and is focused on spending time in the outdoor areas.”

One classic example of the style can be found at an 18th-century stone villa at the foot of the Tramuntana mountain range on the Spanish island of Mallorca. 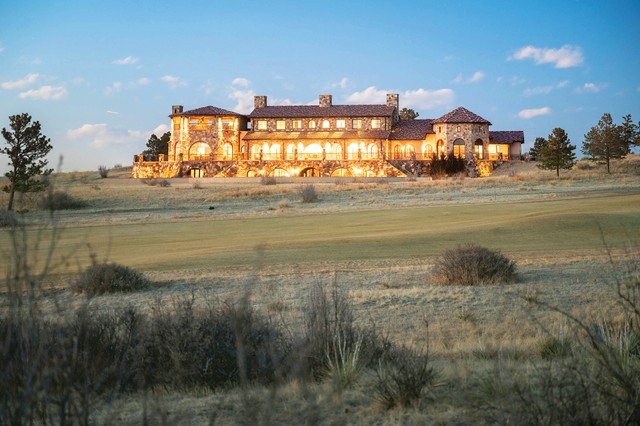 The property is surrounded by almond plantations and citrus, fig, and olive trees, and the grounds feature palm trees, bougainvillea, hibiscus, and roses, according to the listing. There’s also a pool and a spa, lounging areas and pavilion, plus a small church, a painter’s studio, tennis courts, horse stables, and a riding arena on the estate.

On the interior, which is about 6,500 square feet, features include arched doorways, exposed ceiling beams, fireplaces, and hardwood or tile floors. A loggia allows for outdoor dining, and there’s a courtyard as well. Sotheby’s is offering the property for €3.49 million.

Although Mediterranean-style homes still put a premium on outdoor space, newer builds also take full advantage of technologies, such as integrated systems that monitor temperature. And many have more open-floor plans.

“As some of the more modern trends are open spaces with abundant light, this is now applied in Mediterranean-style homes, too,” Vanoli says. “This is possible thanks to modern technologies to control the temperature inside.” 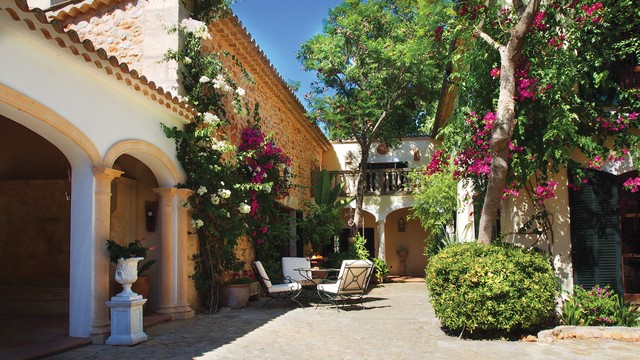 Outside, there’s ample patio space surrounding an infinity pool that overlooks the Mediterranean Sea, plus a covered dining area and lounge and a garden. There’s even a private staircase from the primary bedroom suite to the pool area, according to the listing. It’s currently on the market for €6.25 million.

Not surprisingly, the style has been adopted far outside Spain, Italy, and the other European countries that border the Mediterranean Sea. That’s the case at Casa de Cascadas in San José del Cabo, a city on the southern tip of Mexico’s Baja California peninsula. 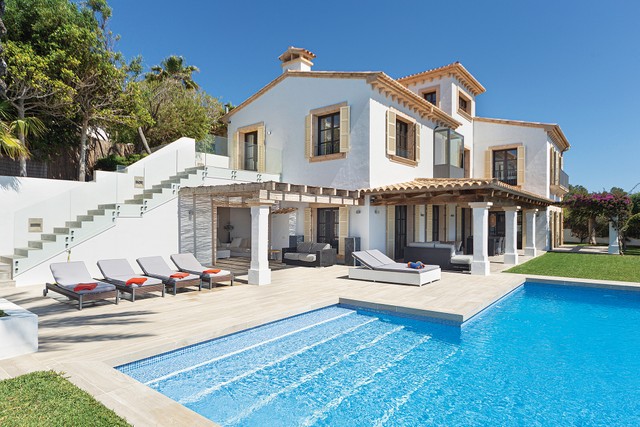 Overlooking the Sea of Cortez, the 8,210-square-foot residence also features an infinity pool hovering over the water, and views from nearly everywhere on the property. It’s listed at just under US$6 million.

Mediterranean-style architecture has even migrated to areas without water views, notes Susie Langford of Colorado-based LIV Sotheby’s International Realty. “In Colorado, there is a surplus of homes that are contemporary, Mid-Century Modern, and that have more rustic mountain aesthetics,” she says. “To have a Tuscan or Mediterranean-style home stands out and makes every day feel like a vacation with its more coastal design.”

But instead of azure seas, it has views of Rocky Mountain National Park, Pikes Peak, and the Colorado Golf Club on which it sits.

Located at Colorado Golf Club in Parker, Colo., this 16,000-square-foot home is reminiscent of some of the most beautiful Italian estates. 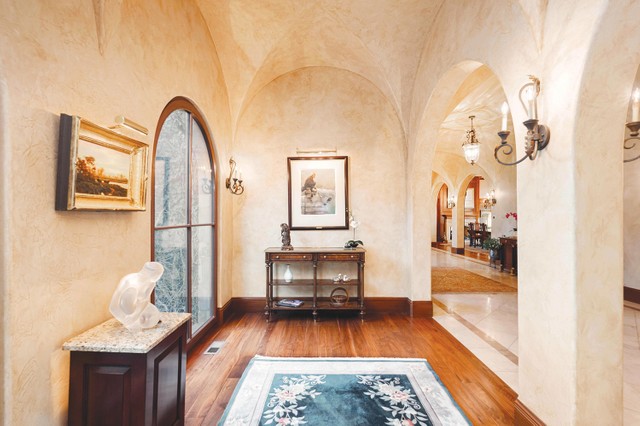 Other features include an open layout, two custom-designed offices, a gourmet eat-in kitchen, a two-bedroom guesthouse, and a four-car garage. There’s also a party room with two fireplaces, a marble-and-mahogany bar, and, of course, views of the greens and Pikes Peak in the distance. Meanwhile, in Florida, the Mediterranean style has had several incarnations, according to Dennis Carvajal of ONE Sotheby’s International Realty.

The residences of the early aughts were darker, more formal, and compartmentalized, according to Carvajal. But when those properties are updated with open space and lighter color palettes, they are as popular as ever.

“A lot of those homes sat on the market because people didn’t like the style. For a while there, I thought they were actually incredibly undervalued,” he says. “You take those homes and you give them a more contemporary twist—paint them white, make the interiors much more light and bright—and they’re a huge hit. I mean, people see them and they love them.”

One of Carvajal’s current listings is a villa dating to the 1920s located on nearly three acres, one of the largest non-waterfront plots in Miami’s Coconut Grove. The home has been modernized, but retains the classic roof, arched doorways, and indoor-outdoor living indicative of Mediterranean-style architecture.

Offered at US$17.5 million, it includes eight bedrooms and 10 bathrooms, plus two offices, a gym, and a loggia leading to the four-car garage.

The estate also features a reflection pool surrounded by thousands of native trees and plants in its botanical garden by landscape architect Raymond Jungles.

“The grounds are incredible,” Carvajal says. “There are waterfalls, koi ponds, observation decks. It’s just amazing, for lack of a better word.”

Steady As She Goes

5 Homes with Private Docks That Will Really Float Your Boat