It goes without saying there is more to Indian food than butter chicken and tikka masala, but only in recent years have people begun to better understand and appreciate the heritage and delight of Indian cuisine.

With nearly 1.4 billion people, 22 official languages and hundreds of dialects, and a unique topography ranging from deserts to snow-capped mountains, it’s no surprise that the country’s cuisine varies by region, town, and even family.

“India is as vast as Western Europe,” says Camellia Panjabi, renowned chef and group director of Indian restaurant group MW Eat, which owns the one-Michelin-starred restaurant Veeraswamy, Britain’s oldest Indian restaurant founded in 1926. “There is no such thing as European cuisine, but there is French, Spanish, Italian, and Hungarian cuisine. India has more than 50 cuisines, not only according to regions, but also religion and communities.”

While there are unifying ingredients across the country, like garlic, turmeric, coconut, and ghee, they vastly differ based on a region’s bounty. For example, northern Indian cuisine is generally more cream-based, while southern Indian dishes typically have more seafood, coconut, mango, and tamarind. Both in and outside India, chefs seek to elevate traditional dishes with unique flavors. Masque Restaurant in Mumbai, led by executive chef Prateek Sadhu, is an ingredient-driven restaurant with a 10-course tasting menu that explores flavor profiles from across India. Sadhu likes to create familiar dishes, but treat ingredients in unfamiliar ways.

The black garlic-glazed barramundi from Masque.

“We launched a new space called the Masque Lab, which doubles as a research and fermentation lab, as well as an open kitchen,” Sadhu says. “We’re working on creating new flavors from a specific ingredient and playing around with preservation techniques, different temperatures, or cooking techniques to see what we can bring out. Some of my favorite results have been from our blackening projects and slow fermenting of produce.”

In addition to blackened mango ice cream, one of his favorite dishes is the char-grilled barramundi with a clam rogan josh. While a rogan josh is typically mutton or lamb cooked with fennel, chili, and ginger in mustard oil, he uses clams (seafood would never be found in a traditional rogan josh), and the salinity balances out the other flavors.

“It’s more than taking regional recipes and plating them with new tweaks,” Sadhu says. “We try to revisit these traditions and ingredients with purpose and find new ways in which to build cross-cultural bridges. We’re constantly trying to marry the old and new, whether in terms of recipes, methodology, or ingredients.”

Quality ingredients are the pinnacle of any meal, and Akshay Bhardwaj, executive chef of one-Michelin-starred restaurant Junoon in New York City, takes advantage of fresh produce, like royal trumpet mushrooms and heirloom tomatoes, from local vendors at the nearby Union Square Greenmarket. Growing up in New York to a restaurateur father and a mother who would cook Indian food seven days a week, Bhardwaj wanted to marry traditional Indian-style cooking with culinary experiences he had growing up in America.

One of Junoon’s most popular dishes is smoked masala ribs. The charcoal-smoked pork ribs, smoked tableside, are marinated in a vindaloo spice rub and served with watermelon radish achar. Bhardwaj says this was somewhat controversial at first, as many Indians don’t eat pork and fine-dining restaurants eschew eating food with your hands. Two years since it was introduced, it is still on the menu and thriving. 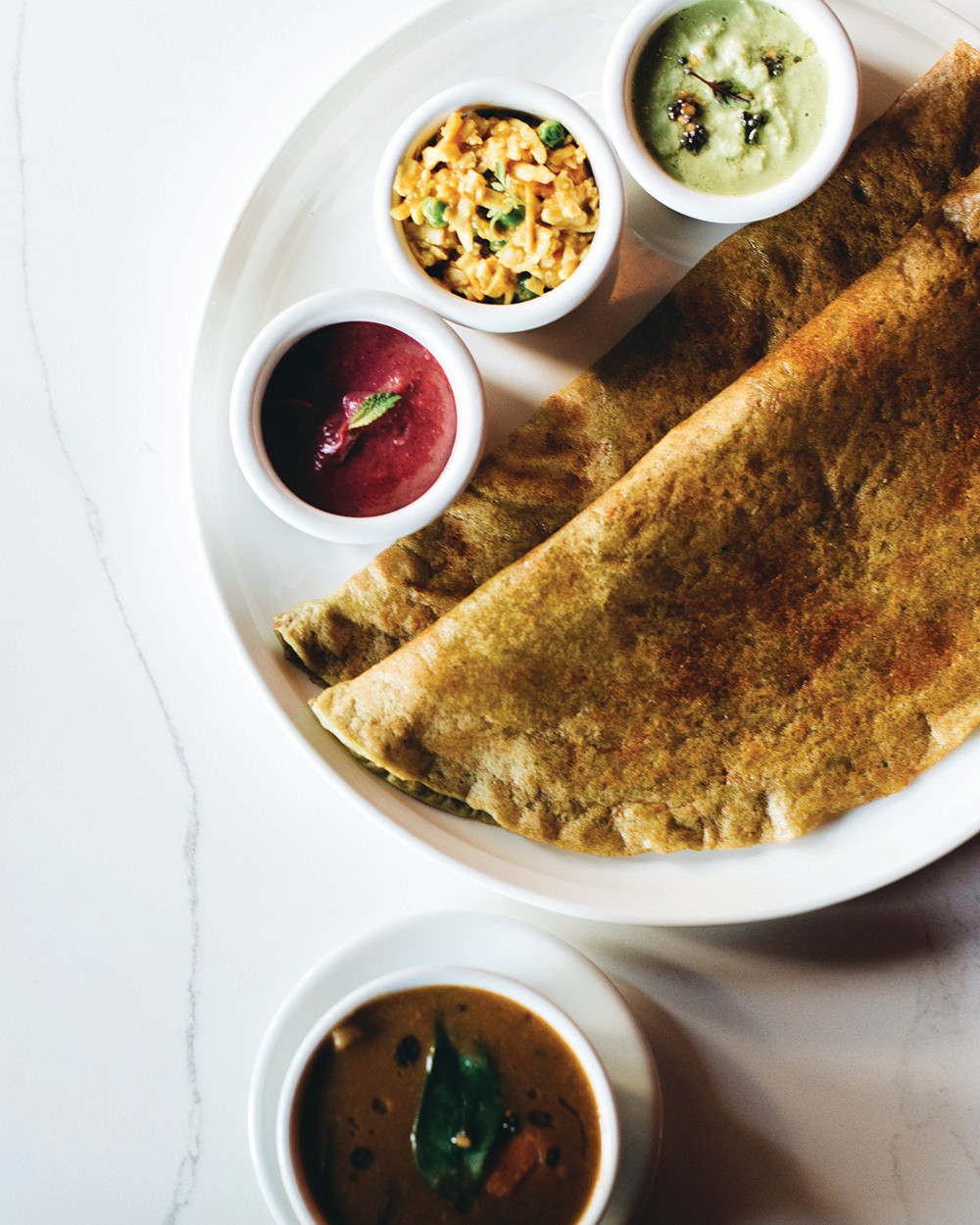 “You might expect our restaurant to have naan or chicken tikka masala, and we don’t,” Walia says. “We are trying to expose people to things they don’t normally see at Indian restaurants.” Rasa focuses on southern Indian cuisine and incorporates seafood, though many of the types of fish locally caught in California, like halibut, aren’t available in India. Another popular dish at Rasa is the wild mushroom uttapam with wild and cultivated mushrooms and wild truffle oil. Walia wanted to incorporate various textures and temperatures to infuse modernity into an otherwise traditional dish. In addition to local, and sometimes nontraditional, ingredients, he says presentation is key. “Rasa revolves around creating an experience, because ethnic restaurants aren’t known for experiences, they’re known for good food,” he says. 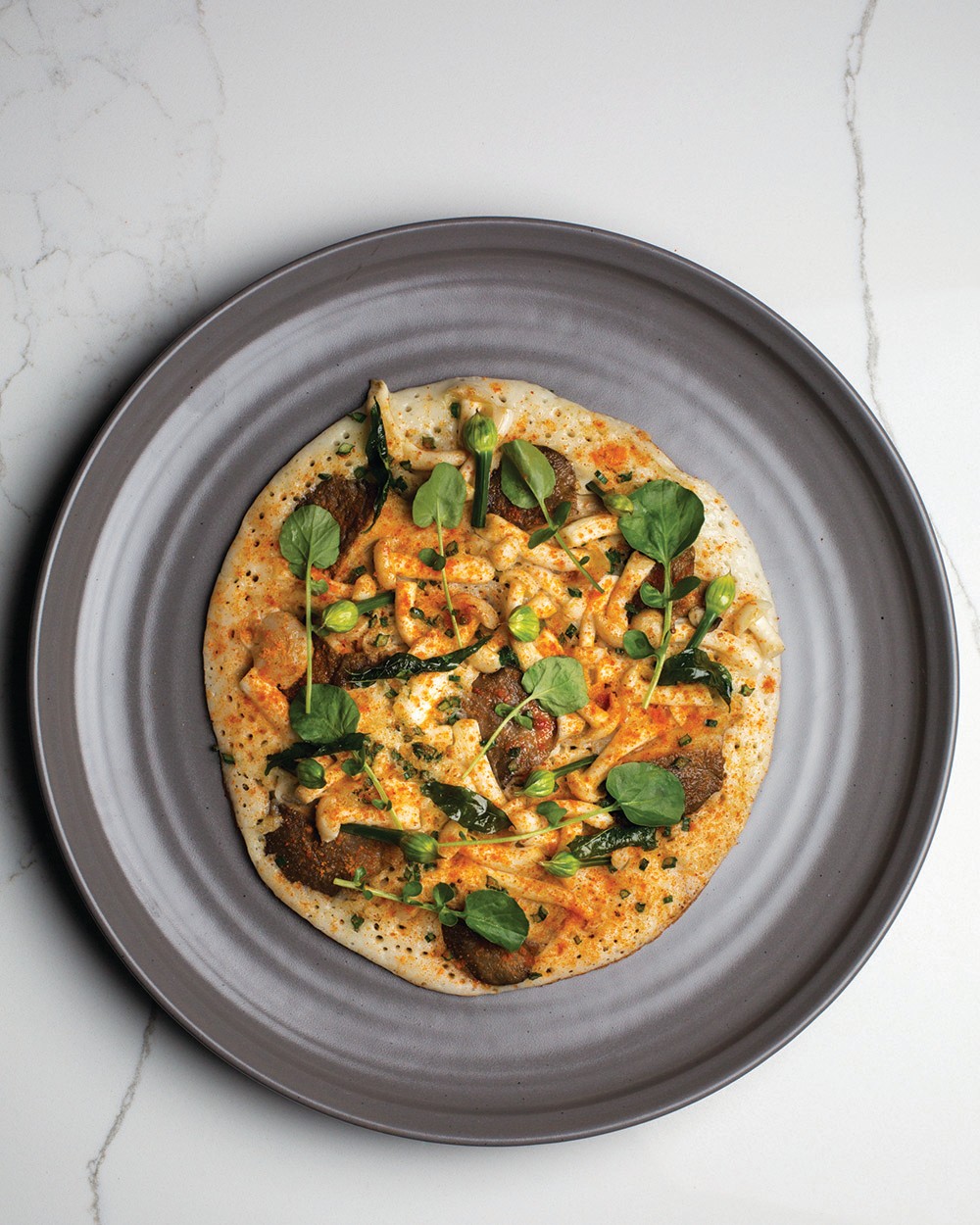 A mushroom uttapam with both wild and cultivated mushrooms from Rasa.

Still, good food and quality ingredients go a long way. Panjabi of Veeraswamy spares no effort to source the finest ingredients, including red chilies and saffron from Kashmir, chilies from western India, and cardamom and cloves from Malabar, and also makes fresh paneer daily, sourced from Britain’s Jersey cow milk. Like many restaurants, they are hoping to elevate the perception of Indian food.

“Fine dining never meant Indian food,” Sadhu says. “In the last decade, and with the hard work of a few pioneers, we’re starting to see that change. We’re trying to instill the idea that the possibility of this new kind of Indian food also exists—one that leans on our past but is firmly rooted in the present.”

The Beauty Of Boho Chic

Luxury Home Sales Soar, Even Helping Houses That Languished On The Market For Months