In a city overrun with enticing cultural offerings, Berlin is anticipating a project unlike any other. The Humboldt Forum, developed over the past decade on a historic site at the heart of the city, will occupy a floor area of more than 30,000 square meters, bringing together the arts and sciences in a way rarely seen before.

Inspired by the brothers Alexander and Wilhelm von Humboldt (among Germany’s greatest thinkers on education, culture, science, and nature), the complex will be home to four institutions: the Ethnological Museum, Asian Art Museum, Humboldt University, and Stadtmuseum Berlin (the local history museum). Cafes, shops, and restaurants will be offered as well.

The US$700 million development project, which hasn’t been shy in voicing aims to be a global center for culture, has been described as the German equivalent of London’s British Museum. Once fully realized, the Forum will offer an event program packed with music, theater, dance, performance, literature, film, and media.

“The Humboldt Forum represents a very special opportunity for culture, art, science, and improving our understanding of the world,” says the Forum’s general director, Hartmut Dorgerloh. The complex sits in the historic heart of Berlin, across from the beloved Museum Island along the River Spree.

In 2002, the German parliament approved the partial reconstruction of the Berlin Palace, which dated back to the 15th century. After suffering significant damage during World War II, the Palace, which was first used as a fortress and castle, was demolished in 1950. During the early 1970s, the East German government constructed its new Palace of the Republic on the site, which later sat empty and di­lapidated after reunification. Earlier this century, the German Bundestag decided a new building should be created behind the restored facade of the earlier Baroque building, and that it would be a home for the new Humboldt Forum. 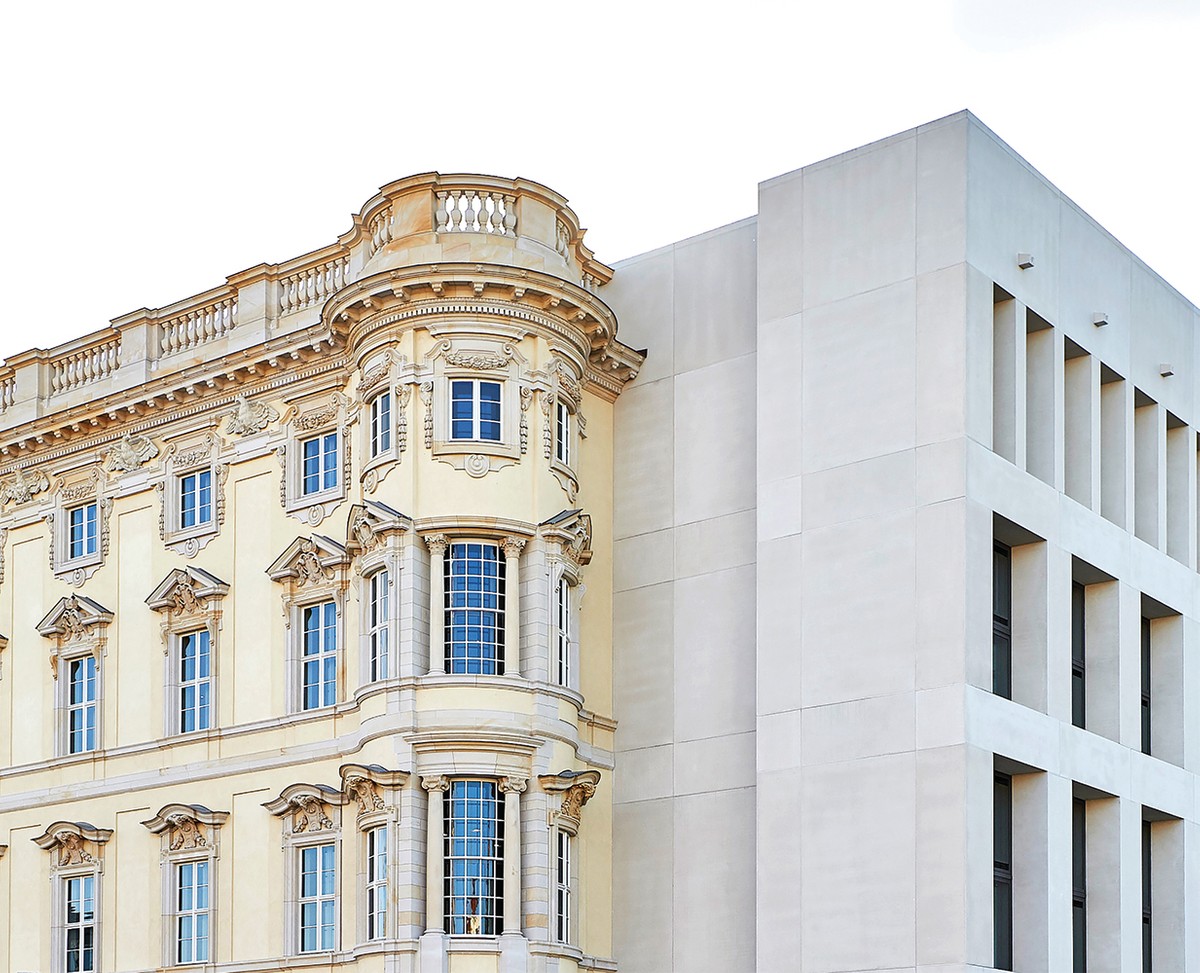 The modern and classical stand side by side at Humboldt Forum on the River Spree.

The ambitious project is the result of an unprecedented partnership between four institutions from the cultural and academic fields—the Prussian Cultural Heritage Foundation (responsible for Berlin State Museums); Cultural Projects Berlin (working in conjunction with the City Museum Berlin); Humboldt University; and the Humboldt Forum Foundation. Its museums and exhibitions will open in phases, with the Ethnological and Asian Art museums opening in September 2021. (Leadership hopes all components of the Forum will be fully open by the end of 2021.) The first exhibitions to open will cover the history of the Humboldt Forum, the Berliner Schloss site, and the Forum’s namesake brothers. “The Humboldt Forum is the new cultural heart of Berlin,” says Burkhard Kieker, CEO of visitBerlin. “A place for the arts and sciences, for exchange, diversity, and a multiplicity of voices.”

While the building’s exterior mostly resembles the Baroque style once favored by German royalty, the interior, designed by the Italian architect Franco Stella, is thoroughly modern. The site, which dates to the mid-15th century, sits in the heart of the German capital, within walking distance of key sites such as the Brandenburg Gate, Alexanderplatz, and Checkpoint Charlie. Three of the building’s sides shine in bright yellow, while the eastern portion, on the banks of the River Spree, features a modern, sleek facade with a large terrace. The reconstruction of the Baroque facades, which was funded entirely through donations, enlisted a small army of sculptors, plaster molders, and stucco artists who created more than 2,300 figures and approximately 23,000 sandstone elements.

“The architecture stands out due to its contrast between the Baroque and the contemporary,” Dorgerloh says. “The building reflects not only the breaks in the site’s history, but also points to the theme of connecting differences that will be the leitmotif of the Humboldt Forum’s programming.”

Perhaps the most unique component is the new Humboldt Laboratory, a project of Humboldt-Universität zu Berlin designed to be a workshop for anyone who wants to participate in the process of scientific research and discuss global challenges such as climate change, environmental destruction, and species extinction.

Beginning in the fall of 2021, around 20,000 art objects from the world-renowned collections of Berlin’s Ethnological Museum and Museum of Asian Art will be presented on the second and third floors. Visitors will be able to examine works from Africa, America, Asia, and Oceania, spanning from 5,000 B.C. to the present, while learning about the circumstances under which the art was sourced. The Forum has promised to explore the difficult history of colonialism and the role Europe has played throughout history to the present. “We hope it will be a unique place of inquiry and encounters, for socializing and reflecting,” Dorgerloh says. “Ultimately, we hope it is a place where differences come together.”

Golf Homeownership Is Heating Up, Even Where You'd Least Expect It