Sam Yo, a London-based Peloton instructor, is the first to say that the months he spent at a monastery when he was 20 years old ultimately had the biggest impact on how he wants to live his life.

“Every day was simple, straightforward, and structured,” says Yo, now 42, who spent his early career in the theater, making his West End debut in The King and I in 2000, before continuing an incredible two-decade career in the theater that ended in 2018. “That gave me the space to have more awareness, to get in touch with my culture, and uncover the answers to some of the questions I had about my identity, what I can contribute to the world, and what I could let go.”

But Yo also is clear on another thing: You don’t have to join a monastery—and shave your head, he says with a laugh—to achieve that same sense of serenity you can get in a place focused on contemplation and prayer.

“We can all agree that there’s a lot of noise and it’s ongoing 24/7,” he says. “But you can find a way around that by evaluating what you have in your life that you can strip back on and I always try to tell people that it’s not so much about stuff. Rather, it’s more about the quality of stuff you have and the quality of people you have around you.”

Read on as Yo shares his tips for resetting, and something he does every day to maintain serenity:

SET GOALS—AND STICK WITH THEM

To feel healthier during a stressful time, break down your goals. “Make your game plan manageable,” Yo says. “The words I always use are motivation, discipline, and structure,” he says. “So if you haven’t exercised [since Covid began], motivate yourself to start small and do it for 10 minutes twice a week and then add more time—that takes discipline and structure.” 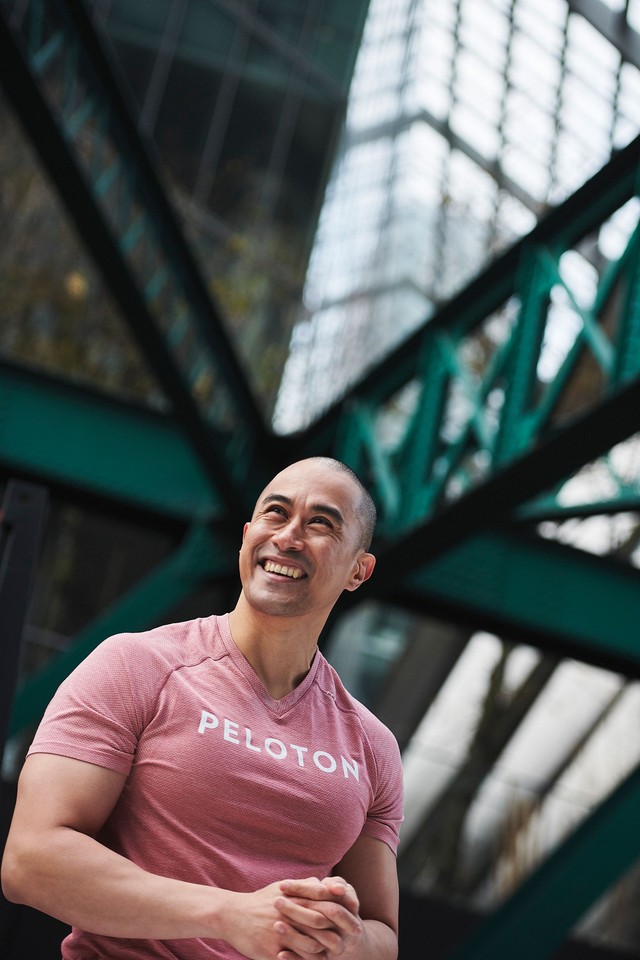 Sam Yo, a Peloton instructor, suggests you break down your fitness goals into a manageable game plan in order to stick to them.

TAKE CARE OF YOUR BODY

As you age, the way you move should evolve, too. “As I’ve gotten older, my joints have gotten stiffer so I always make sure to stretch during at least four sessions a week,” he says. “I’ll do a five- to 10-minute yoga or meditation session at the end of the night to keep my body mobilized.”

For Yo, this includes tending his 15-year-old bonsai tree named Bruce Tree, a gift he received from a friend a decade ago. “I water and clip the dead leaves first thing every morning and this exercise lets me put my thoughts into focus,” he says. “At the monastery we were told to give merit and service to others. My first action is to give Bruce Tree my attention every morning.”

While it’s fun to wake up and cook up a different breakfast every day, Yo has eaten the same morning meal of scrambled eggs with smoked salmon, whole-grain toast, and a cup of tea for as long as he can remember. “I enjoy it, but it also eliminates the need to make a decision every morning,” he says. “Having this sense of clarity about my breakfast gets my day off to a really good start.”

FIND YOUR OWN UNIQUE WAY TO STAY GROUNDED

Ask Yo and he’ll tell you that feeling grounded remains a work in progress. “For me, it’s all about taking time to cut out the noise,” he says. “I focus on my breathing, working out, spending time with family, and there’s always Friday night dim sum and Netflix to look forward to!”

Storing and Maintaining Your Car Collection