Sometimes called “diamonds of the kitchen,” because of how rare and valuable they can be, truffles have a distinctive aroma and rich taste. They are often associated with fine dining and Michelin-starred restaurants because of their steep price tag and their origins in gastronomic destinations of France and Italy. Truffles can cost up to thousands of dollars because they’re difficult to find, grow, and store.

Depending on the type of truffle, they can smell and taste musky, garlicky, sulfury, earthy, or buttery. Truffles tend to look like misshapen, rough-skinned potatoes on the outside, but with a firm, yet spongy texture on the inside. 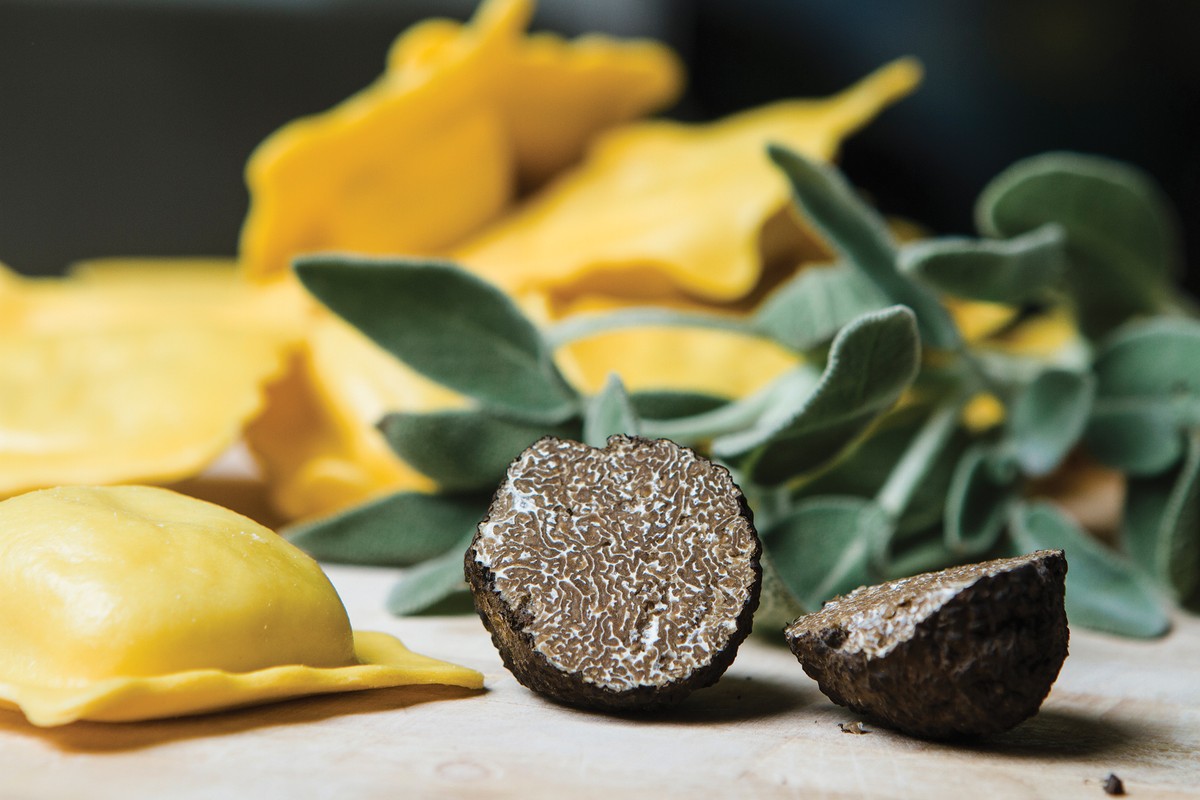 Truffles, which are often served over decadent pastas or meat dishes, can cost up to thousands of dollars because they’re difficult to find, grow, and store.

Growing truffles requires the perfect storm and takes a very specific type of calcareous soil and environment, not to mention that they must be foraged for, as they grow anywhere from one inch to five feet underground. Unlike other mushrooms that grow on logs or from the ground, truffles need broad-leaved trees, specifically oak, hazel, poplar, beech, or pine trees, to grow in what’s called ectomycorrhizal symbiosis. The fungi spores adhere to the roots of trees, which provide nourishment to the fungal symbiont and help them grow. Apart from alkaline soil and the presence of tree roots, scientists still haven’t had a major breakthrough in discovering the conditions to force fungi to make truffles.

“Truffles are really special because they’ve never been successfully cultivated on a commercial scale,” says Ian Purkayastha, founder of Regalis Foods, an online purveyor of rare and luxury gourmet foods like truffles, caviar, Japanese Wagyu, uni, and exotic seafoods. New York-based Regalis Foods supplies 90% of the U.S.’s Michelin-starred restaurants, including famed Eleven Madison Park and Le Bernardin, with their truffles and other gourmet goods. “They’re the last entirely wild food in existence because it grows underground and has to be found with the aid of a trained animal,” says Purkayastha. “That, coupled with being a seasonal product and global warming is degrading the annual truffle crop yearly, it’s a precious resource.”

“White truffles should be firm, dry to the touch, and have no soft spots,” says Purkayastha, who started foraging mushrooms at the age of 15 in his hometown in Arkansas. “Black truffles should be firm, but they can have a bit of give to them. Black truffles have a two- to three-week shelf life, while white truffles have a seven-day shelf life. They should have firmness and a pleasant-smelling aroma, which changes quickly when they start to degrade.”

It’s common for both dogs and pigs to hunt for truffles. Pigs, with their superior sense of smell, are enticed by beta-androstenol, a steroidal pheromone found in truffles, while select dog breeds are easily trained to hunt out the pungent smell. 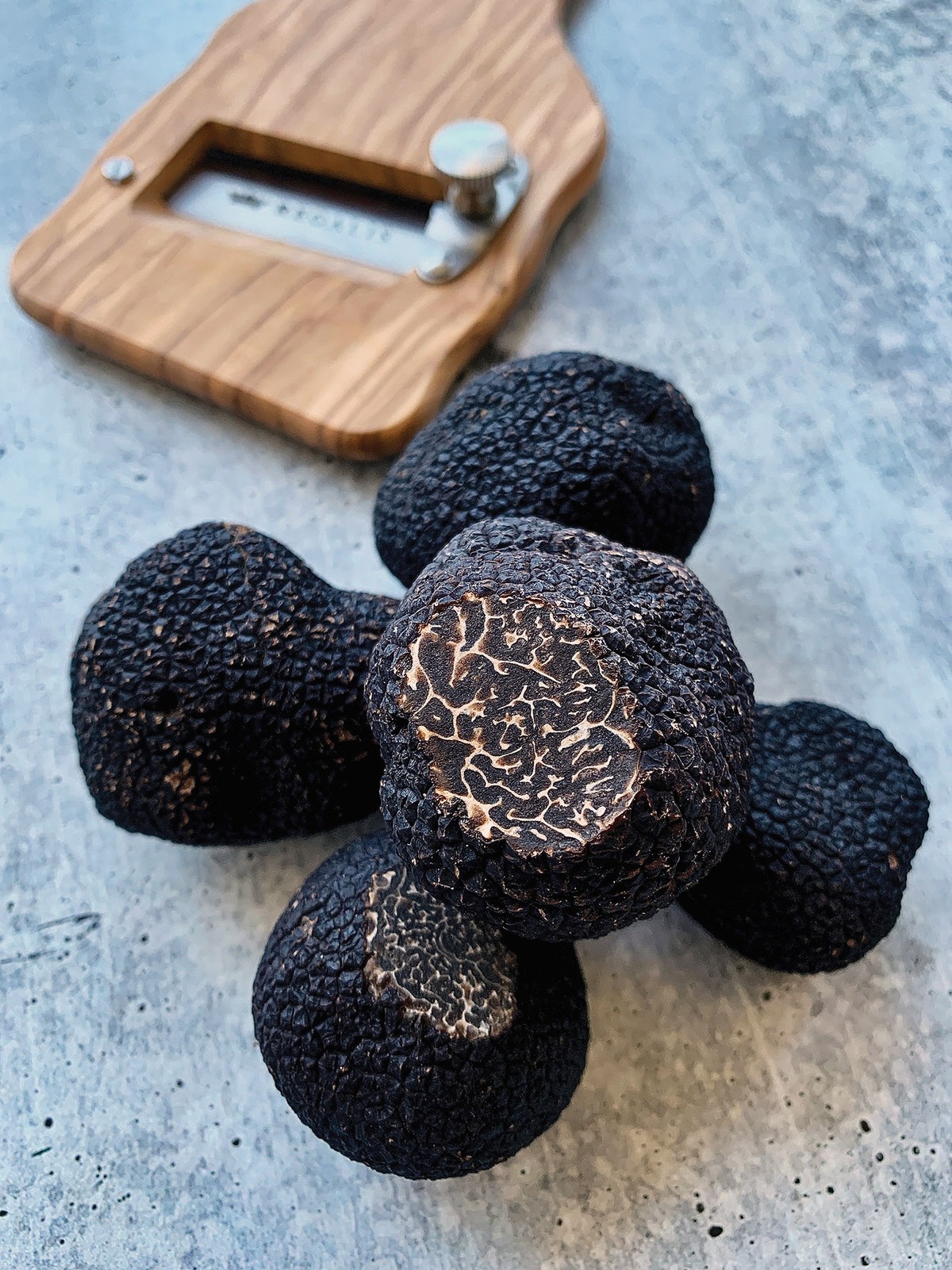 The black winter truffles from Regalis Foods are the most valuable types of truffles on the market. The black variety has a more earthy flavor.

The white truffle is the most valuable type of truffle on the market. White ones have a nutty sweetness and garlicky funk. 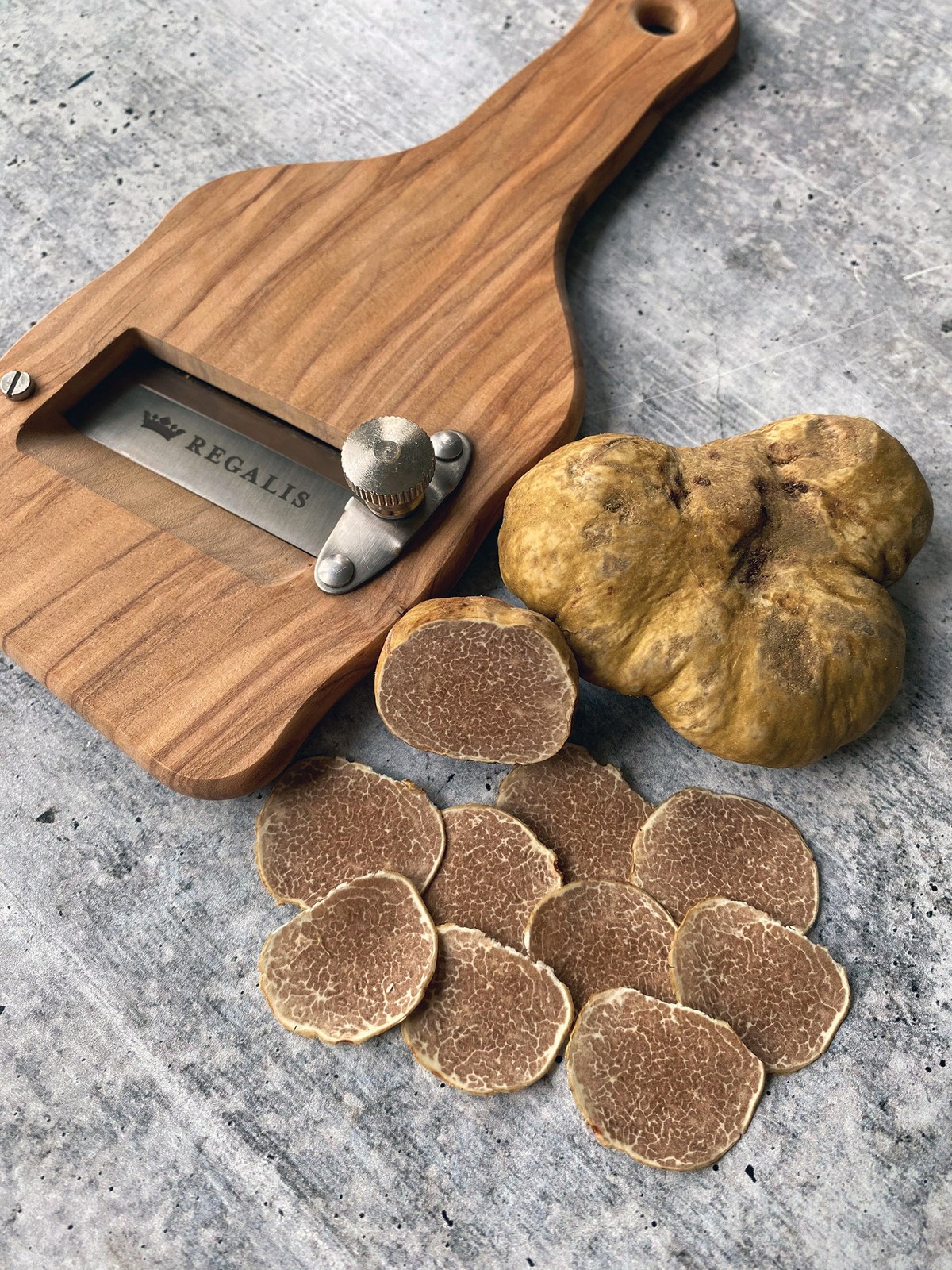 HOW TO USE THEM

Purkayastha says that black truffles offer more earthy flavors and benefit from gentle heating. He recommends eating black truffles tucked against meats as they roast or shaved into sauces. White truffles, on the other hand, have a nutty sweetness and a garlicky funk and are great for shaving atop dishes as a finishing touch, for example in risotto dishes or pasta with cream sauces.

“Even sweet dishes, like pastries or ice cream, can be absolutely delightful with white truffles,” he says. “High-quality examples of either type of truffle are also fragrant enough to infuse butter with their aroma, simply by storing them both together in a closed container in the fridge.”

In addition to whole truffles, there are also truffle-infused products, from olive oil to butter and salami and honey. However, Purkayastha advises doing research if you’re after the real deal.

Despite the difficulties in growing truffles, there are companies and individuals dedicated to advancing truffle farming, like French start-up WeTruf. Founded in 2019 by engineer and molecular diagnostics expert Flora Todesco and Claude Murat, a fungi biologist and research engineer at INRAE (a public research institute working on the sustainable development of agriculture), WeTruf studies technological innovations to improve the process and improve yields of farming. In collaboration with INRAE, WeTruf launched a product, pF Tracer One, which measures the soil water potential to help truffle growers manage their watering levels. WeTruf also does molecular diagnostic testing on various truffle species to learn more about this unique mushroom.

“We are helping farmers use good practices to cultivate their truffles,” Todesco says. “Recent discoveries include understanding of the truffle life cycle, including sexual production, the influence of the climate, and mycelium growth. This knowledge opens new doors for orchard management, and WeTruf hopes to bring all the new scientific discoveries to truffle growers.”

Todesco says that the truffle industry in France is more dynamic than ever, and she wants to help bring truffle knowledge to the masses. In addition to WeTruf’s water management product, the start-up’s services include truffle farming training, advice on how to begin farming truffles, drafting projects, research, and workshop hosting.