Mid-century modern appears to be the singular style that has managed to resist the unavoidable cycle of trends in design. Whether it’s having a resurgence or has crested is no longer the question; it’s part of our lexicon.

The now ubiquitous term was first coined in the 1980s by author Cara Greenberg to describe the American interpretation of Bauhaus and International Style between 1933 to 1965. Economic prosperity, technological advances and the expansion of cities led to the development of new materials and the need for smaller, more practical furniture. Architects and designers explored unfamiliar textures, forms and colors and experimented with plastic, Lucite, vinyl, glass and plywood. Functionality drove design, making for revolutionary styles that championed simplicity with flaunted clean lines, gentle organic forms and nontraditional materials. These creations became the visual language for a new age; a signifier of progress and a fresh start.

But how is it that mid-century modern designs are as visually compelling today as they were 50 years ago? Though undeniably beautiful, iconic and highly collectible, many of these original pieces were ultimately made to be democratic. Simplicity and functionality made the furniture of this period incredibly accessible, easy to live with and understood by everyone. The designers we idolize today were masters at creating intuitive, universal furniture that has proven to transcend trends.

During this extraordinary time, five players stand out as bastions of mid-century modern. These designers offered some of the most collectible furniture in the 20th century, whose inspired work keeps us coming back for more, and are why this retro style is here to stay.

Husband and wife team Ray and Charles Eames are considered today to be the titans of modern design, recognized not only for their innovative furniture but their contributions to architecture, industrial and graphic design as well as film. The duo met while attending the Cranbrook Academy of Art in Bloomfield Hills, Michigan, and their collaborative partnership continued until Charles’s death in 1978. Design was a way of life for the pair, who wanted their work to improve the quality of life for the masses.

While at Cranbrook, Charles worked with close friend and architect Eero Saarinen to develop a chair made out of a new material: plywood. After moving to Los Angeles in the 1940s, he and Ray evolved the concept further into a highly sculptural piece first produced by Herman Miller, known as the Eames Chair Wood model. Time magazine would go on to award it “Best Design of the 20th century,” describing it as “much copied but never bettered.”

Plywood and plastics offered a myriad of shapes to experiment with in search of designs that were accessible, affordable and functional for consumers both at work and at home. “We want to make the best for the most for the least,” was their mission statement. The fluid, biomorphic forms and highly experimental approach to materials like plywood, molded fiberglass and plastics transformed the way Americans furnished their homes. Modern design became mainstream.

The Eames Lounge Chair and Ottoman, their most iconic creation, was described by Ray Eames as “comfortable and un-designy.” The veneer-covered plywood and leather design was introduced in 1956 as the luxury counterpart to their mostly affordable line, and is now part of the Museum of Modern Art’s permanent collection. As the highly coveted, unofficial talisman for mid-century modern, the Eames Chair has surpassed design culture to become part of the greater American vernacular, becoming a prominent fixture in television as well as the subject of countless memes.

Born in 1902, Arne Jacobsen is one of the first and most influential post-war Danish designers. The master of mid-century design, who considered himself primarily as an architect, also tried his hand in lighting, furniture, textiles and tableware.

Jacobsen graduated from the Royal Danish Academy in 1927, shortly after winning a silver medal for a chair design exhibited at the Exposition Internationale Des Arts Decoratifs in Paris. His breakthrough, however, came in 1929 when his design won the contest for House of the Future—considered one of the first introductions of modern architecture on Danish ground.

He began designing furniture in 1950 with the Ant Chair as his first success, made in 1952 for Danish furniture company Fritz Hansen. Constructed with tubular steel legs and a continuous piece of curved plywood in a range of vivid colors, the Ant Chair sold in the millions.

The Swan and Egg Chairs followed shortly thereafter in 1958 as part of an enormous project commissioned by one of Jacobsen’s biggest and most important clients, Scandinavian Airlines System. The air terminal and hotel in Copenhagen became a showcase for his all-encompassing skills as an architect and designer. From the towering skyscraper to the textiles, furniture, lighting—even ashtrays and cutlery—that inhabited it, Jacobsen designed it all.

His groundbreaking styles embraced a functionalist approach but with an imagination and zaniness that is utterly idiosyncratic. Free-form, organic shapes inspired by both nature and the craft-based heritage of Scandinavian design were given an industrial verve that made for some of the most influential expressions of mid-century design. 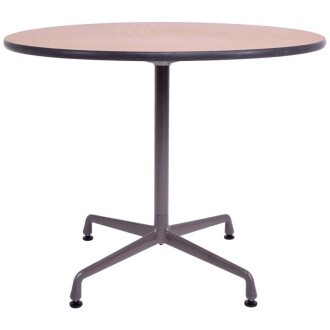 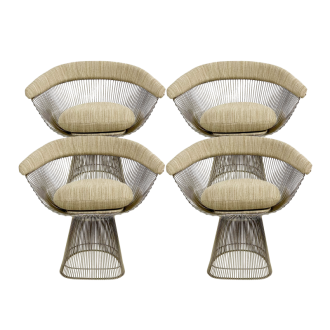 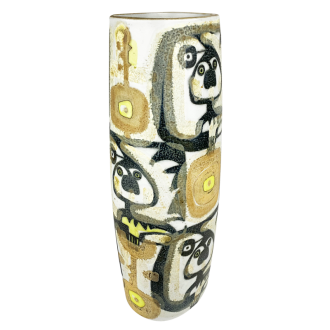 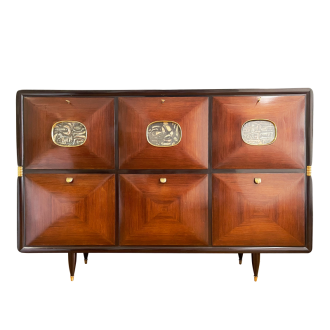 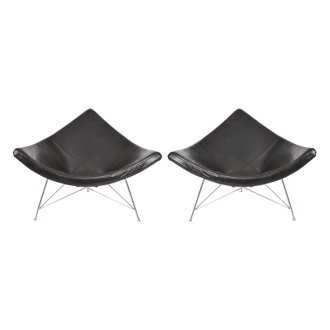 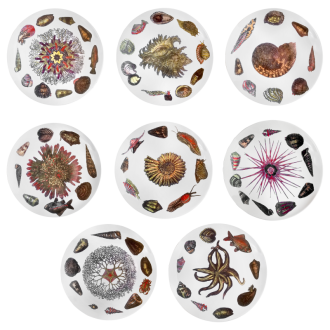 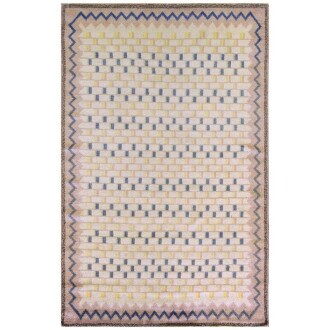 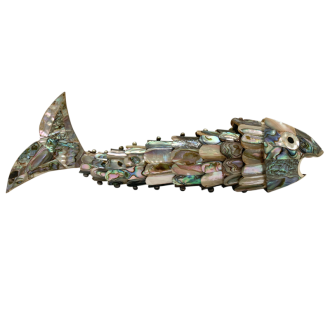 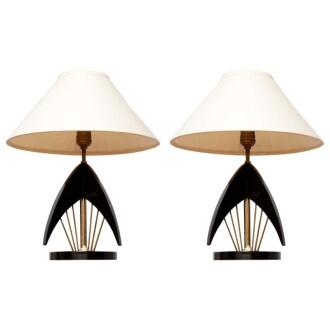 Interdisciplinary artist Harry Bertoia, whose work encompasses sculpture, furniture and jewelry design, printmaking and music, was born in Italy in 1915. After immigrating to America at the age of 15, he attended the Cranbrook Academy of Art in Michigan alongside fellow students Charles and Ray Eames, Walter Gropius and Florence Knoll. Bertoia headed the metals department at Cranbrook, but pivoted his focus to jewelry design when World War II made metal a scarce and expensive material. His wearable designs, which included the wedding bands for Ray Eames and Ruth Bacon, would pave the way for his sculpture work.

Bertoia turned his attention to prints and drawings, producing monotypes that he eventually sold to The Solomon R. Guggenheim Museum when he was in his 30s. After Cranbrook, the artist joined Charles Eames in California to continue their experimental work with molded plywood until former classmates Hans and Florence Knoll invited him to the East Coast. The couple had just launched their eponymous furniture company and offered Bertoia a garage studio near their factory in Bally, Pennsylvania, with free rein to create whatever he wished. The result: the Bertoia Chair collection, introduced in 1952. 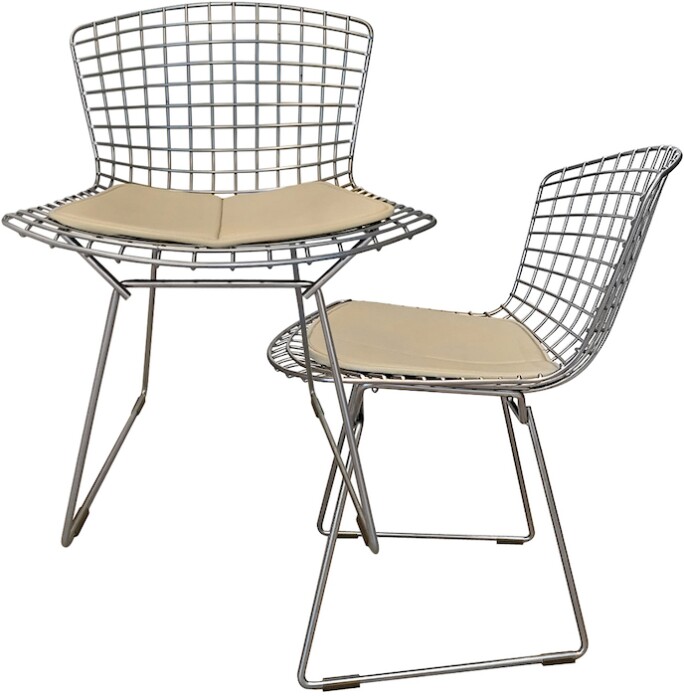 The designs, which encompassed the Diamond Chair, Lounge Chair and Side Chair, featured a strong yet delicate shell made with industrial wire mesh. The chairs introduced a new material to furniture design, and despite being made almost entirely by hand, were an immediate commercial success. Graceful, organic silhouettes and tubular legs are studies in form and space and make Bertoia Chairs sculptural works of art, while bright solid-colored upholstery adds that quintessential mid-century exclamation point.

Working out of his adopted home of Pennsylvania for the remainder of his life, Bertoia went on to craft over 50 public sculptures and more than 100 abstract metal works.

We have Ludwig Mies van der Rohe, considered one of the 20th century’s greatest architects, to thank for the development of modern architecture. Born in 1886 in Germany, his first commission came as a mere 20-year-old, and he quickly became widely respected in Europe for his innovative structures. Built in 1929 for the International Exposition in Spain, the Barcelona Pavilion is a study in minimalism and open space, and a complete rejection of historical styles. Van der Rohe believed architecture had a responsibility to represent modern times, not the past, and it was this philosophy that drove his work.

As the last director of architecture at the Bauhaus design school before World War II, the architect eventually moved to Chicago when Nazi pressure forced the school to close. Leading what’s now the Illinois Institute of Chicago, van der Rohe not only redesigned the entire architectural curriculum but also the university’s campus. He settled in Chicago for the remainder of his life, producing an oeuvre that showcased his “less is more,” reductionist approach.

His furniture designs also express the spirit of the modern era. The Barcelona Chair and Table, Brno Chair and Tugendhat Chair combined luxurious fabrics like leather with modern materials like chrome. His passion for rich materials, surfaces and textures lent elegance to pieces that were otherwise free of excess and ornamentation. Similar to his architectural work, he employed cantilevers to enhance the feeling of lightness in his chairs and tables. In turn, they appear both harmonious but strong, delicate but confident, making his furniture collection as much a staple of modernism as his buildings.

Furniture designer Hans Jørgensen Wegner, a maestro of 20th-century Danish modernism, is credited for heralding Scandinavian design in the United States. Wegner was born to a cobbler in 1914 and began his work in design as a teenage apprentice with Danish master cabinetmaker H.F. Stahlberg. After attending Copenhagen’s School of Arts and Crafts, he worked for fellow Danish architect and furniture designer Arne Jacobsen, crafting furniture for the Aarhus City Hall in Aarhus, Denmark, before establishing his own furniture studio in 1943.

His early training in carpentry and architecture gave Wegner a masterful understanding and appreciation for wood and traditional joinery techniques. Experimenting with primarily natural materials, like woven rattan or leather in addition to wood, he sought the simplest possible designs. Though he often turned to traditional furniture archetypes for inspiration, Wegner aspired to purify and whittle down the original designs to their essence. Known for his painstaking production process, it’s said King Frederick IX of Denmark waited two years for a Valet Chair while Wegner tested the prototype at home.

Produced in 1944, Wegner’s Chinese Chair draws influence from 17th-century Chinese seating. His 1947 Peacock Chair, which marked the turning point in his career, recalls the form of an English Windsor Chair. The Round Chair from 1949 is deceptively simple: smooth, hand-carved wood arms and legs cleverly hide interior mortise-and-tenon joints for a seamless, bare look. One of his most iconic designs, this piece became all the more famous as the seats used during Nixon and Kennedy’s presidential debate in 1960.

The Wishbone Chair is arguably Wegner’s most well-known achievement and has been in continuous production since its debut in 1950. Made using refined, steam-bent wood, the design was inspired by portraits of Danish merchants sitting in Chinese Ming Chairs. The Three Legged Shell Chair, with its arched legs and winged silhouette, is an exquisite, more daring design that appears to float. With graceful curves and sweeping silhouettes, each design was applauded for its avant-garde look and distinct expression.

Wegner completed more than 200 chairs and 500 prototypes in his lifetime—as well as cabinetry, desks, tables, beds and lighting—becoming a prolific influencer during the golden age of Danish design. Craft, comfort and form reigned supreme for the “Master of the Chair,” whose works are architectural masterpieces in their own right.

The lure of mid-century modern is undeniable and enduring. The champions behind its most iconic designs authored pieces that strike that impossible balance between the familiar and novel, and that’s enough to keep us hooked. Discover our wealth of magnificent mid-century finds to blend in—or stand out—at home.